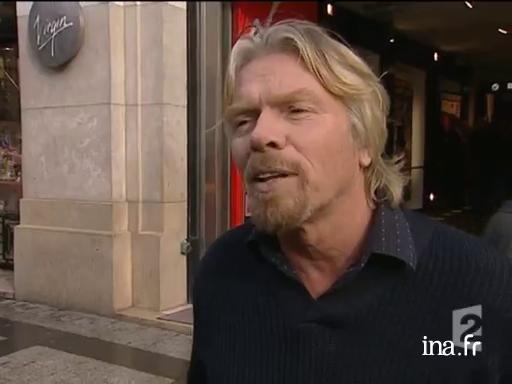 On the occasion of Richard Branson's visit in Paris, in order to present his autobiography, a look at the unusual career of the multibillionaire founder of Virgin.

Born the 18th July 1950 in Shamley Green in Great Britain, Richard Branson, a mediocre student (he is dyslexic) but born entrepreneur, began from the age of 18 to invest in all kinds of activities to finally specialise at the beginning of the 70s in the sale of records by mail order by creating the Virgin brand. He soon opened his own shop in London, then following his logic of expansion created a recording studio ("The Manor") and finally a record label, Virgin Records.

The first record on the label, Tubular Bells by Mike Oldfield came out in 1973 and was a global success (he sold over 10 million copies in 10 years). But Branson refused to be locked into a genre and very soon diversified his catalogue by signing the Sex Pistols in 1977 and at the beginning of the 1980s artists like Phil Collins and Culture Club.

Throughout the 80s the Virgin brand flourished and Branson decided to systematically diversify the activities that it conducted: apart from cultural department stores (Virgin Megastores) he got involved with air travel (Virgin Airways), financial products (Virgin Direct), mobile telephony (Virgin Mobile), television (Virgin 17) and even space tourism (Virgin Galactic). His fortune is today estimated at £3 billion.

England's favourite businessman is now visiting France. I'm referring to Richard Branson, 55 years old, founder of Virgin. His biography is being released today. The multimillionaire laid the first bricks of his future empire when he was 20 years old. Vincent Fourcade and Patrice Brugère accompanied him on his Parisian marathon.

A 2CV was our coach. To seduce the French, Richard Branson falls for our national patrimony. He's come to Paris to present his autobiography. Although it's true that he's only 55 years old, he's already had a very full life. He's worth a billion and a half dollars, and his fortune, he owes it to a few musical notes.
(Music)

1973, Michael Oldfield's "Tubular Bells", the future theme of the "Exorcist" film. Branson signed it. He sold more than 8 million copies of it.

[English] Nobody wanted it, so we set up a music label to release this title. "Tubular Bells" was our first album, our first success.

Not bad for a man who dropped out of school at the age of 16. Today, Branson has become Sir Richard. Planes, trains, soda, he's done it all. 270 companies throughout the world, 50,000 employees. And each time, Branson launches ideas. He lets others develop them.

[English] My way to set up a business, is to find the right people and delegate, give them freedom to make mistakes or make the right choices. Sometimes, they fail, sometimes, they succeed.

It's Branson's job to get people to talk about him and therefore his group, and he's not one to avoid zaniness. A Parisian swim, all sorts of disguises. But don't be mistaken. The man has his feet firmly upon the ground, and when an idea pops up in his head, he never lets go of it.

[English] Everyone will tell you: "That's a bad idea", "You should never do it", "You're going to fail, fall straight on your face". But in the end, nothing gives: on forward!

The latest idea of this business adventurer: commercial flights into space. Starting in 2008, 150,000 euros per ticket. You have 2 years to find the money.
(Music)