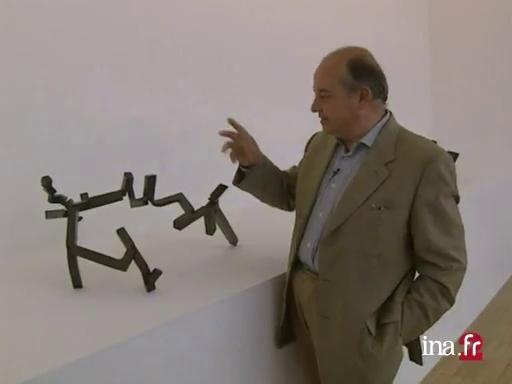 Report on metal sculptor Eduardo Chillida's work, on the occasion of an exhibit dedicated to him at the Musée du Jeu de Paume, in Paris.

Born and died in San Sebastian, Eduardo Chillida (1924 - 2002) owes much of his artistic identity to Basque Spain. After having started his architecture studies Chillida went to Paris to dedicate himself to sculpture and there he met Constantin Brancusi, Antoni Tapies and Pablo Palazuelo, who remained an unwavering friend. If his first sculptures were stylised silhouettes inspired by Cycladic art, the artist quickly turned towards abstraction. Recognition wasn't far behind and in 1958 he received the Grand Prize for Sculpture at the Venice Biennial.

In the 1970s his work was characterised by monumental pieces, a lot of which in forged iron in the purest of Basque ironmonger tradition. His massive, contorted tubular compositions highlighted space through knots. They have been internationally commissioned, from the Berlin Chancellor's office, to the UNESCO headquarters in Paris as well as the World Bank in New York.

Chillida would develop a large body of graphic work in parallel, essentially made from engravings putting the accent on white and the opposition to fullness and emptiness. Interested by the thoughts of the philosopher Heidegger, Chillida worked with him to complete the pieceArt and Space(1968). Martin Heidegger, Emilie Cioran and Octavio Paz in particular have written about the man and his creations.

He's more like the man of steel, Basque Eduardo Chillida whose sculptures are found throughout the world's museums. A friend of George Braque, the sculptor sees his work awarded in Paris for the first time, with a very beautiful retrospective an the Jeu de Paume museum, which Sarah Carpentier and Mathieu Dreujou have visited for us.
(Music)

Praise of emptiness with five tons of steel. It's monumental, it's aerial, it's heavy, it's immaterial. Eduardo Chillida's sculptures defy gravity.

What he wants to grasp, what he tries to obtain, is a central emptiness, the hollowness, the air and the space that circulate through the sculpture.

Emptiness, volume, roundness, angles, flexibility and rigidity, the sculptor seeks to make opposites cohabit. Guided by the material, he often improvises his sculptures.

We get the impression that the work is in space, is very complex, creates a sort of central emptiness, yet when we analyse it closely, we realise that it's very simple. It's a quite simple iron bar, all straight, that was then cut up.

Cut with a forge, manually. The art is abstract but the technique remains traditional. Chillida is inspired by the traditions of the iron craftsmen of his native land, the Spanish Basque country. He works the metal like a blacksmith, a craftsman but for a completely contemporary work.

Chillida didn't set out to make works that were extremely complicated. What he looked for was, to work the material according to his logic, with great simplicity.

After the war, he was mentored by the biggest collectors. Praised by Braque, encouraged by the avant-garde, his works have travelled around the world, yet he remains unknown in France. The Retrospective therefore honours once again one of the last signatures of the twentieth century.