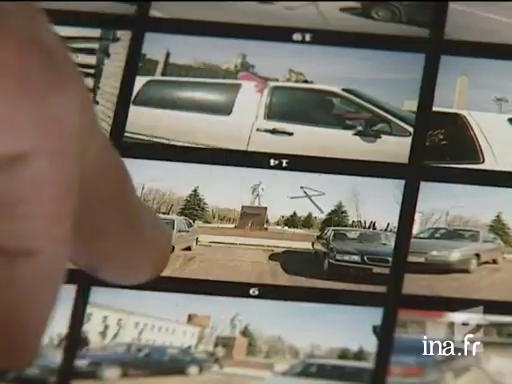 Portrait of Martin Parr, photographer and guest of honour at Arles's 2004 international photography "Rencontres" (encounters). A great collector of kitsch objects, Martin Parr has a caustic and twisted view of the world.

Today, Martin Parr is an internationally renowned photographer. Born in Epson in 1952, he studied photography at the Polytechnic School in Manchester.

His view was sometimes tender, often caustic and ironic, even cruel, looking over all aspects of daily life of the middle-class, particularly in England. His photos, veritable sociological documents, capture daily banality, ravages of consumerism and mass tourism with humour. A big collector of kitsch objects, he joined the Magnum agency where he shook up the style a bit in 1994.

He was also interested in fashion and advertising, participating in the making of the film It's Nice up North and wrote several pieces dedicated to his works: Last Resort (1996), Common Sense (1999), Think of England (2000), Boring Postcards (2000), Signs of the Times (2006). In 2002, a major retrospective exhibition was presented in London, then in Bradford. In 2004 he was the general commissioner for the international photography meeting in Arles.

The international photography meetings of Arles regularly welcome British photographer and atypical collector Martin Parr, whose view of the world and of kitsch things in particular, is caustic and twisted. Portrait of Isabelle Baechler and Didier Dahan.

There are strange collections that intrigue us or call out to us. This display is one of a much travelled photographer who tracks down the most trivial uses of photography, going as far as hiding himself in the middle of accumulated trinkets. Here he is as the patron saint of photography.

With the American flag?

Yes, what nerve, if this isn't funny then I don't know what is! I found this toilet paper with an image of Saddam in the United States. It says "wipe yourself with the Iraqi".

Anglo-saxon humour, for sure, but Martin Parr also has a very scathing view on everything that surrounds it. This is the remarkable eye that the Arles meetings managers wanted this year.

In this agitated era, photography is a view of the modern world, which allows us to label it, and to ponder its evolution. What I'm looking for is, pictures that inform us, and that do so in an eloquent and aesthetic manner.

In his own shots, Martin Parr never balks in front of colour. And the kitsch is always welcome. His life is above all a collection of pictures.

I admit that collecting is a sickness, it's a drug for me. But at the same time, I think that if I didn't collect all of these objects, nobody would do it. They would be neglected and we would forget about them. In fact, I'm saving them from oblivion and providing them with a pedestal.

All of the uses of pictures fascinate him, from the poetic to the tacky, from the useful to the postcard, which no one looks at anymore. In Arles, all summer long, he displays a portion of his incredible collection. But don't bother looking for a picture of him, he would find that very tacky. Or else, he'll be hidden behind a pair of sunglasses.