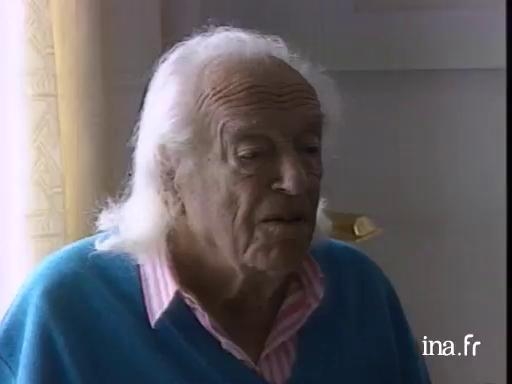 Portrait of the great Spanish poet Rafael Alberti on the occasion of his 92nd birthday, and report from his home in the El Puerto de Santa Maria foundation in Andalusia.

Through his work and his political engagement, the Spanish poet Rafael Alberti (1902-1999) left his mark on the twentieth century, where he had mixed the greatest figures, from Aragon in Neruda, to Picasso in Allende, to Garcia Lorca in Buñuel.

Painter first, before becoming one of the most famous poets of the Generation of 27, awarded from his first piece (Sailor on Dry Land, 1925) to the prestigious National Poetry Prize, he was more and more influenced by Surrealism (Concerning the Angels, 1929), contemporary of his political engagement, and social poetry (Poet in the Street, 1938), before the Civil War and 38 years of Argentinean and Italian exile disrupted his work and his destiny. Faithful to his Marxist engagement, friend of Fidel Castro, he became a symbol of anti-fascism and on his return in 1977 was elected communist deputy of Cadix, before renouncing all political responsibilities to dedicate himself to poetry.

Laureate in 1983 of the Cervantes prize, he continued to exert an influence from his birth down in Cadix Bay, of which he had often spoken nostalgically, until his death, on the aesthetics and ideology of poets and contemporary Spanish intellectuals.

You are now going to see an exceptional report. Rafael Alberti, the last sacred genious of an extraordinary generation of Spanish artists like Picasso, Garcia Lorca, Dali and others has, in fact, agreed to let one of our teams visit him at home to talk about his life and his work. With Thierry Stampfler, George Minangoy and Jean-Louis Pacull, he blew out 92 candles.

It was a few days ago. All of Andalusia was celebrating Rafael Alberti's 92nd birthday. A tribute to the poet, but also a symbol of political resistance. From the exile imposed by Franco to his election as deputy of Cadiz in 1977, Alberti's career throughout the century is a part of the most intense moments that Spain has lived through. Thus explaining the strength of this tribute.

Far from this commotion, we we're lucky to have the opportunity to spend a few hours in the intimacy of the great Andalusian poet. 2 years ago, Alberti amazed us with his intellectual energy and his astonishing memory that helped us relive his complicity with Garcia Lorca, Picasso, and Bunuel. Unfortunately, though, a serious car accident now seems to have plunged him into a sort of absent-minded state that he only escapes to speak with his wife or to recite one of his feverish poems that recall the siege in Madrid by the Franco supporters.

Even before the war in Spain, Rafael Alberti's career was already hugely spectacular. A national prize in literature from his very first book, in 1925, he then becomes friends with all of the giants of his era as far as the literary and painting world is concerned.
(Music)

In the foundation that he created in his native town of Puerto Santa Maria, we can discover amazing letters with king Juan Carlos, Aliende, Aragon and many others. His work as a painter, his first vocation, not to mention certain original editions illustrated by Miro, Tapiès and Picasso.
(Music)

Despite his exile, Alberti has always praised his native Andalusia. And his most vivid memory remains the Bay of Cadiz which cradled his childhood before he was forced to leave for Madrid.
(Music)

From the age of 37, Alberti wrote these lines: "When I die, open my eyes up slowly. You will see your fingers whiten from the foam of the beach and your nails from fine sand".