The royal orchestra of Concertgebouw 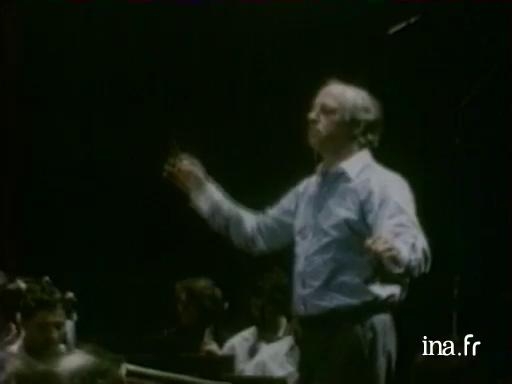 Conversation with Bernard Haitink, conductor of the Concertgebouw orchestra in Amsterdam. He brings up the repertoire and the rejuvenation and evolution of this orchestra. Excerpts from symphony num. 92 Oxford by Haydn and Bruckner's 9th Symphony.

The Amsterdam Concertgebouw Orchestra is one of the five or six most renowned in the world and has been for over a century. It's the royal orchestra of the Netherlands and it is based in Amsterdam. It owes its name to the building opened in 1888, reputed for its acoustic qualities: it's one of the most visited concert halls in the world. Its directors are among the greatest musicians of the 20th century. Willem Mengelberg directed for fifty years, then Eduard von Beinum until 1959 and Bernard Haitink for 29 years. Riccardo Chailly, then Mariss Jansons then succeeded. Richard Strauss, Gustav Mahler, Igor Stravinsky, Serge Rachmaninoff, Serge Prokofiev... all were heard within those walls. The orchestra created works from several musicians: Bartok, Berio, Britten, Hindemith, Kodaly, Milhaud, Schnittke... Recordings are released regularly, highlighting the orchestra's activities throughout its history.

Bernard Haitink, the Amsterdam Concertgebouw will soon be a hundred years old, and you have directed it for twenty years. You were a very young conductor leading old musicians, and you have really made your orchestra much younger. Why?

It's natural because young musicians come in and the older ones... It's the normal situation in life. And at that time, I was the youngest in the orchestra. And the orchestra was not old but elderly, but now the orchestra is very young.

You came to Paris to the Salle Pleyel for an exceptional concert and in order to direct the works of Haydn and Bruckner. That is, that you have a very eclectic repertoire, very broad.

For an orchestra like the Concertgebouw, it's essential that we have a very vast, very varied repertoire. It's more of a world orchestra than the Paris Orchestra and the Boston and Philadelphia Orchestras.

You have the works of Mozart, Schubert, Stravinsky, Boulez, Bartok, that's necessary.

Is the audience in Holland made up of season ticket holders or on the contrary does your audience come from all different places?

No, we have the...a very significant number of season tickets. I believe, that's the life of the orchestra. The season ticket holder who always comes to the concert, is very... I'm happy. That creates a sort of family, it's a big family I believe.

From time to time do you help young composers with contemporary creations?

Yes, at the moment... Yes, [?] directed the orchestra and he mixes... But I believe these are the... it's traditional for our new composers to also confront our audience with their compositions.
(Music)

In France, you are well known for your discography which is huge. But do you have the impression, as a performer, you Bernard Haitink, personally, that your vision of the works has changed much in twenty years?

You could say that... I don't believe that you change so abruptly. You develop your interpretation, because you are together with the orchestra for twenty years.

So when you are in front of your orchestra, are you a very imperialist conductor, very determined, or do you allow your orchestra to play how they want?

I don't know. Ask the musicians, it's not up to me to answer that. But I don't think now that dictatorships are... possible, dictatorships. No, it's a sort of...co-operative, it's a mutual thing.