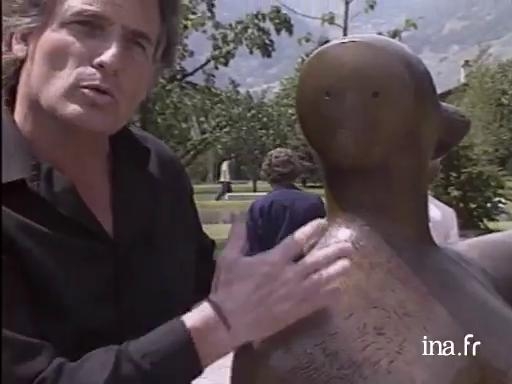 Retrospective on Henry Moore, the British sculptor that died in 1986, at the Giannada foundation, in Martigny (Switzerland). Moore created monumental works, based on themes related to nature, femininity and fertility.

Originally from mining Yorkshire, Henry Moore (1898-1986) saw war twice. In 1917 he was sent to the French front and was in the battle of Cambrai where he was gassed. Yet he carried on and used his war pension to study sculpture at the School of Art in Leeds, then at the Royal College of Art in London in 1921. He moved on from classic sculpture quite quickly in favour of the arts premiers, notably pre-Columbian statuary which his work is strongly influenced by. As was his favourite figure, a stretched out silhouette, derived from the ToltecChac Mool, sacrificial pedestals in the form of a man lying on his elbows with his legs bent. He progressively stylised it to end up with a pierced concave shape.

The influence of the artisticzeitgeist led Moore to be tempted by surrealism for a while. He joined the Unit One Group of Paul Nash in 1933 and participated with him in the organisation of the International Surrealist Exposition in London in 1936. This period of creative imitation was interrupted by the international events of 1939 and Moore became an artist of war. He made powerful drawings of Londoners fleeing the bombing in the underground, which would bring him international renown. Awarded at the Venice Biennial in 1948, Moore began to receive larger and larger public commissions, one of which being a monumental statue for the headquarters of UNESCO in Paris.

To conclude, a monumental sculpture, Henry Moore's. Switzerland honours him. Moore, a British man who died in 1986, was one of the greatest sculptors of the century. The exhibit takes place at the feet of Mount Saint Bernard, in Martigny, under the aegis of the Giannada foundation. Georges Begou, Yves Breu, report.

Already famous for its pear alcohol, today the village of Martigny, 13,000 inhabitants, shines throughout the art world thanks to the Giannada foundation whose prestigious exhibits each attract 300,000 visitors. The record will perhaps be broken this time since the retrospective of Henry Moore, a sculptor who disappeared 3 years ago, is certainly the nicest collection of the artist's major works.

We've already had two other great sculpture retrospectives. The first one was Rodin, then Giacometti, and I think that Moore's was a natural must. Moore was very close to nature, you know. We find the hills of his native country, and, as you also know, he was born at the edge of the sea, he took stones that were worked on, dug by the ocean or by bones, or even skulls worked by forms and you find, here, look, holes. He's the one who invented, sort of, this form with holes. We also find a bit of femininity. Women play a central role in his work: fertility, the theme of fertility, women and children, family. Look at these traces here, so it's carved. You'll find several places. We're not sure where the cloth ends, the model's robe nor where the skin starts.

Moore considered that sculptures were made to be outdoors and should live in perfect harmony with the sky, the trees and the boulders. Until November, the sun and the fruits of Martigny's orchard will be able to reflect themselves in the sculptures' patinated bronze. To not admire and caress these works, if you pass through the region, would be to seriously miss out on the religion of beauty.
(Music)