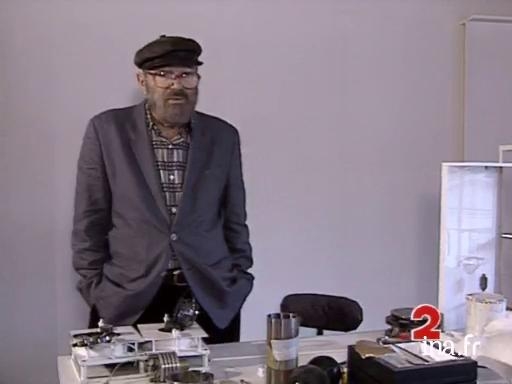 Portrait and interview of sculptor Takis, in the context of an exhibit that is dedicated to him at the Galerie Nationale du Jeu de Paume.

A sculptor born in Athens in 1925, Panayotis Vassilakis, nicknamed Takis, is part of the diaspora of Greek artists who went to Paris to escape the consequences of civil war. From 1942 to 1949 Greece was in the grip of bloody conflict that pitted Communist revolutionaries against the government supported by England and the United States. Following the example of the painters Koulentianos and Xenakis, Takis decided to leave to work in France and went to join the great renovators of 20th-century sculpture like Brancusi and Giacometti.

His research was based on the exploration of the immaterial and energy, that he took the gamble of introducing into the static universe of sculpture. From 1955, magnetism, sound, light, engines entered into his composition of the series Signaux, vertical iron rods crowned with metallic pieces. 22 years later, the site of La Défense in Paris would provide the framework for a basin of Signaux, forty immense screws animated by multicolour lights that are a reminder of the Jean Tinguely installations at the Pompidou Centre. His studies of movement and play on light reflections bring him closer to kinetic art.

Let's go meet with a magician and his unusual machines. His name is Takis, an Athenian who arrived in Paris 40 years ago. This sculptor and musician plays with magnets, magnetic fields and even with vibrations. The Musée du Jeu de Paume dedicates a retrospective to him all through this summer. Report, Monique Atlan, Daniel Lefebvre.
(Music)

Capturing the music of the spheres, that was Pythagoras's dream. Today, it is also Takis's, The Greek Takis who brings shapes to life, awakens sounds and is crazy about large spaces. Takis, who provokes the magnetic field forces and transforms them into works of art.
(noises)

Me, I felt spatial things through magnetic fields. That's my instinct. I'm an instinctive scholar, there. But Pythagoras, he spoke before I did.

Respecting the natural momentum of metal, that's his slogan. Here, it's only about forces of attraction, of magnets and especially energy.

Energy, it's all around us, around you and everyone. Energy, it floats, it's circular, it's spirals that surround us. And me, what I would like to do with my work, is to bring an area to life with energy.
(noises)

One day, while waiting for a train at the Calais train station, Takis realised the importance of signs, of this forest of signs that man creates for himself to guide himself, to avoid death, hieroglyphic signs with contemporary uses. And, through the pieces of this retrospective, we participate in the dialogue that Takis pursues mutely with the forces hidden in the materials.
(Silence)