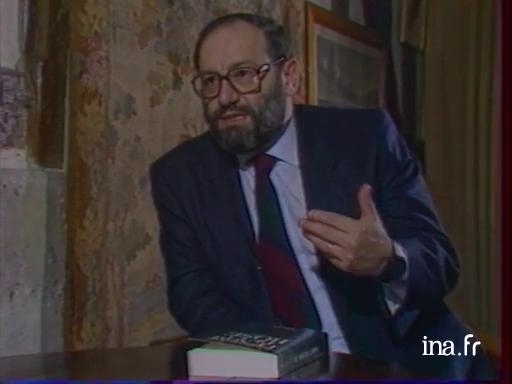 Conversation with Italian writer Umberto Eco, who received the foreign Médicis prize for his novel The Name of the Rose. The famous semiologist explains why he chose to set his novel in the beginning of the XIVth century, a transitional period where people began to interpret natural signs in a modern way.

Fantastic erudition combined with an extraordinary talent for simplifying things, these were Umberto Eco's (1932) keys to worldwide success. Degreed in philosophy, a scholar specialised in education and medieval aesthetics, a pioneer in semiology research (La Structure Absente in 1968 and Lector in Fabula in 1979), he was also a journalist in his earlier days, for the press and especially for television at the RAI. There, he learned how mass communication worked and was led to get involved with various manifestations of popular culture (Il Superuomo di massa in 1976), and most notably with literary genres that were considered to be of lesser importance, such as detective novels and series.

In 1980, The Name of the Rose, his first novel, was an immediate worldwide success, which was explained by Eco's virtuosity in adapting his knowledge in European medieval thought and his own semiological theories to the narrative structure of the historical detective novel genre. Afterwards, Foucault's Pendulum (1988) followed, along with The Island of the Day Before (1994), Baudolino (2000) and The Mysterious Flame of Queen Loana (2004). An essay writer, linguist, semiologist, professor in Bologna, Yale and even at the Collège de France, a journalist and novel writer, Eco is also a member of the Pataphysics College, where his tireless quest for meaning inevitably lead him.

Finally, the Médicis prize was awarded to Italy's Umberto Eco for "The Name of the Rose". It's the first novel for this very important Italian author, who is now 50 years old and who was especially known for his theoretical semiology and sign language works "The Name of the Rose" is his first novel, then, which takes place in the XIVth century, and he explains why to Monique Atlan who interviewed him earlier.

The Middle Ages was an era that was troubled by signification, more than for us, even if we have televisions and telephones. Each event in reality, in nature, was seen as a sign. There was a hallucinatory situation. In the era that I write about, this attitude towards signs was secularizing itself. Like my character does, we started interpreting signs in a way, shall I say modern, natural signs. We were no longer in a symbolic state of mind, but there are other characters that are still in this state of mind. So I found myself, by picking the beginning of the XIVth century, in a rather interesting situation on the split between two universes and two ways of interpreting the world. But we always interpret the world, even today, like a book.

Is it easy to go from essayist writing to that of a novelist?

Well, before starting the novel, I didn't think I was capable of writing a novel. I'm still not sure of it, either. But I'm under the impression that all of my theoretical essays are written like a novel, that is to say, with the need to publicise the research phases. And so, most likely, the day that I wrote a novel, I had to make a novel with a detective structure because I think that all research has a detective structure, even a book on philosophy or a history book.

And do you think that this fantastic experience can renew your approach to theoretical questions?

That, I really don't know. As a theorist of literary communication questions, I wrote a lot on narrativity before, but I must say that the direct experience gave me ideas. So, one always has to experience things to understand something better. Ideas that really aren't that different from previous ideas but they cleared up certain things to me. For example, the fact that a novel isn't, primarily, a product of verbal writing but rather a product of the world's construction. And after having written my novel, I felt the need to read others' novels to see how, primarily, there was, there, the construction of a world from where the linguistic choice ensued.