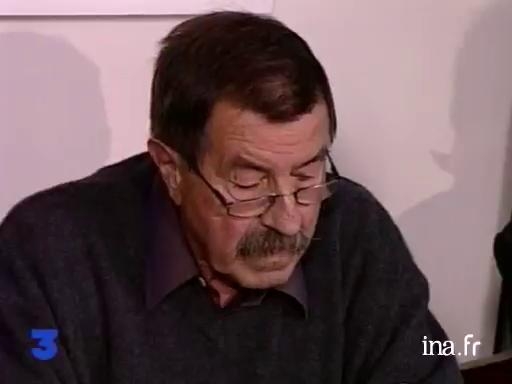 In Stockholm, the 96th Nobel Prize in Literature was awarded to German writer Günter Grass, an opportunity to paint a portrait of this committed man who is a witness to the history of his country, Germany.

Günter Grass was born in 1927 in Dantzig (Germany, today Gdansk, Poland). Enrolled in the Hitler youth and then in the Waffen-SS, he was imprisoned by the Americans. Freed in 1946, he discovered the horrors committed by the Nazis. Firmly positioned to the left, he led a bohemian life in West Germany where he studied painting and drawing.

Close to the Groupe 47, he started to write poetry and theatre pieces. Between 1956 and 1960, he won a scholarship from the Groupe 47 and left for Paris to finish writing his novel, The Tin Drum, published in 1959: the story of a child who in 1930s Germany refused the world of adults and stopped growing up. In Paris he met with intellectuals in St Germain des Près and discovered the Nouveau Roman. In the 1960s, he was politically active alongside the Social Democrats. An active member of the SPD, he distanced himself from it in the 90s. That was the moment when he provoked strong controversy with the publication of A Broad Field (Ein weites Feld, 1995). In this loaded essay, he accuses the ex-Federal Republic of Germany of having sacrificed the ex-German Democratic Republic on the altar of liberalism. In 1999, Gunter Grass received the Nobel prize for literature.

However, in 2006, he revealed his past as having voluntarily enlisted in the Waffen-SS. This late confession, from an active leftist intellectual, caused uproar. Lech Walesa disowned him. Now the quarrels have subsided, today Günter Grass is largely recognized for his political and literary work. The film adaptation of The Tin Drum by Volker Schlöndorff won the Cannes Festival Palme d'Or in 1979.

A committed Nobel winner. Germany's Günter Grass was the one that was desingated for the 1999 prize. Now 71 years old, he hasn't hidden his joy and his former socialist friends from the SPD weren't the last ones to congratulate him. The author of "The Tin Drum" and "Dog Years" has never shown consideration for his compatriots. Sabine Gorny and Christian Gaudin.

1.00 pm. The new Nobel Prize in Literature is quietly leaving his dentist's office, surprised by the news: the consecration for 72 year old Günter Grass and his profoundly humanist work. "The writer for victims, for losers" are the exact words of the Academy. Germany written about, described with all heart and soul. It's because he never forgot his forced enrollment in Hitler's youth labour service nor the post-war fields of ruins. He gave sculpture a shot and revealed his talent through writing. 1959, The Tin Drum, later made into a film, was a worldwide success.

From The Tin Drum on, it can be said that he was a committed writer in the sense that he wanted to describe a specific Germany that the Gemans of his generation had a slight tendency to forget. And I think that he's always been someone that prevented others from wasting their time.

Since then, in his works, from Turbot all the way to the very controversial An Entire History, which is very critical of the reunited Germany, one single obssession: the tragic destiny of his country. Anti-establishment, a reformist more than a revolutionary, a social democrat for many years, he participates in all struggles: abortion, pacifism. A witness of his era, just like his literary idol, Heinrich Böll, a Nobel Prize winner before him, whom he wanted to pay tribute to, this afternoon.

[German] Heinrich Böll would be happy of this prize. He was a friend, even if we didn't always agree. I hope my work will be regarded as a direct descendant of his work, and that I'll sort of be like his heir.

His latest book, not yet translated into French, is an assessment of the century, nothing less. A crash course in history in 100 short stories. An obligation to remember, for the one who will remain the courageous spokesperson of a generation killed and degraded by Nazism and the war.