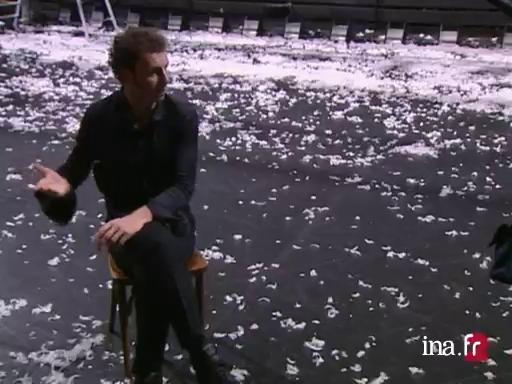 Portrait of the Flemish choreographer, Wim Vandekeybus, who is staging his latest creation, a dreamlike and energetic one, at the Théâtre de la Ville in Paris.

The Flemish-Belgian Wim Vandekeybus, dancer, choreographer and director, was born in 1963. He started as a performer in a contemporary dance choreography show by Jan Fabre, with whom he'd travel the world. In 1986, he founded the Ultima Vez company. His first creation, What the Body Does Not Remember(1987), caused international interest straight away and received a Bessie Award in New York. He won the prize again for his second show, Les Porteuses de Mauvaises Nouvelles. From the start he expressed the violence of the world through his powerful and impulsive corporal movements, with frenetic and intensely physical energy, the fundamental characteristic of his dance.

From 1991, he integrated narrative elements into his shows and inAlle Grossen decken sich zu, in 1995, theatre took over from dance. Wim Vandekeybus made films used on stage, and in this way the film adaptations of his shows. In 2002 he created a solo for the Belgian dancer and choreographer Sidi Larbi Cherkaoui.

Culture with the talent and the imagination of this Flemish choreograph, the most gifted of his generation, Wim Vandekeybus who is showing at the city Theatre his latest creation where he brings onstage the energy, the dynamic, almost the violence of the skin of his dancers. Michel Strulovici, Didier Dahan.
(Music)

Energy at the command post, energy in the jumping area.
(Music)

It is the furious and hectic life that Wim Vandekeybus's company infuses in us, in this stage transformed into an arena.
(Music)

"Last Time", that is the manifest name of this troupe. Like a call to live each moment intensely, a dance on the edge of the abyss.
(Music)

Let us therefore rediscover our vigor in order to destabilize our own habits and the world.

This search towards this energy which is a bit lost, which I want to again bring to life. It is a positive energy, which can, of course, lend itself to a commentary on all the violence that occurs, with an indifference, almost, in the wars and in everything that takes place in the world But I think that this intensifying of energy is very important to me. I do not want to lose it.
(Music)

It is the story of a dream where man struggles in the midst of his distress, his hopes, his shadows.
(Music)

A place conducive to desire.
(Music)