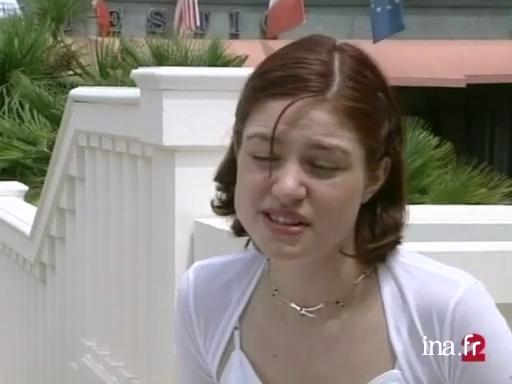 At the Cannes Festival, screeing of Rosetta, the sombre and realistic film by the Dardenne brothers. Interview with the main actress, Emilie Dequenne.

It was to the 15 directors at Cannes that Luc and Jean-Pierre Dardenne, quite experienced directors (especially of documentary films) that the shock of La Promesse was revealed where a promising actor shone through, Jérémie Rénier.

They did the "miracle" again with Emilie Dequenne three years later, this time in "the arena", the Cannes competition. If the press, blown away by the militant realism, the virtuosity of the handheld cameras and the inextinguishable energy of Rosetta which rightly promised a performance award for the actress, the shock was bigger and the cheers were plenty among the "professionals of the profession" when the Palme d'Or was announced.

Since then, the European cinematographic landscape has got used to the raw naturalism of the Dardennes, with Le Fils (Performance Prize at Cannes awarded to Olivier Gourmet in 2002) then L'Enfant, a second Palme d'Or in 2005 - a rare privilege that they share with Emir Kusturica.

In competition for this final day, "Rosetta", directed by Belgian brothers Luc and Jean-Pierre Dardenne. As they mention, they make films that take a look at life, and in this feature-length film which could earn the young actress a Best Actress award, life is more than dark and is often depressing. Antoine Cormery and Bruno Livertout.

In this luxurious and opulent kingdom that is the Croisette, Emilie Dequenne's presence can be seen as being provocative since this young 17 year old actress is, on screen, such an unforgettable incarnation of Rosetta. On the exact opposite side of the coast's palaces, Rosetta lives in a trailer with her mother. Each day, as if she were going to war, she goes to town with a raging desire to improve her situation.

"Come into my office. Come into my office I said! Is it true that you said that I'm often late? It doesn't matter, that's not the problem. Did you say it or not? I mentioned that you were late twice. I said that it was because of the bus... Why did you say that she said that? It doesn't matter, that's not the reason for which you were fired. Do I do my job well or not? Yes. So then why do you want me to leave? I told you. You're being fired because your trial period has ended. Then why me since I do my job well? Because you're the only one to have finished your trial period. Go change your clothing, come back to my office. No.".

Let's just say that Rosetta is a girl who's raging inside, intensely, I would add. I think that she's especially chasing after a normal life. She's trying to catch it and it's exhausting her.

When Rosetta hits things, it's a paradoxical display of the fragility of someone who's cast aside, like millions of others.

It's about these sorts of people who are excluded from society and who try to integrate it, to gain recognition, to exist, not just living like animals but existing for other human beings, people like that, we see lots of them.

If everyone looks a bit, everyone can meet Rosettas. It's not... we're still living in a society that has produced and will continue to produce mutiple, multiple Rosettas.
(Music)

Ending at the very last minute of the festival, this film, served by an exceptional actress, leaves you with a deep sense of discomfort: the sense that you've seen, through glitter and silk, the terrible reality of life.