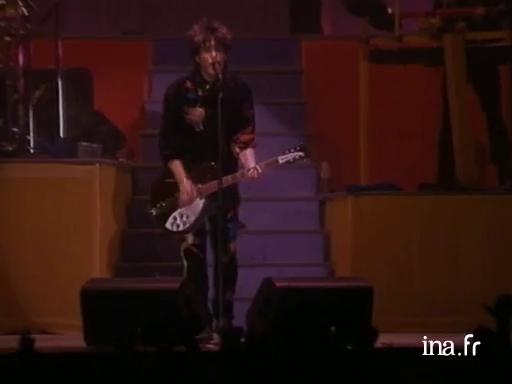 Conversation with musical duo Roxette, the first Swedish group to have international success since Abba, right before they embark on a world tour.

A Swedish pop band consisting of guitarist Per Gessle and singer Marie Fredriksson, Roxette rose to fame at home in 1986 with the single Neverending Love, taken from their first album, Pearls of Passion.

However, it was in 1988, with the release of their second album Look Sharp, that the duo's sugary and extremely melodic pop suddenly achieved huge worldwide success - the song The Look was at the top of the charts overnight, in nearly 25 countries, including England and the US, followed closely by other songs from the album, Listen to Your Heart and Dangerous. Invited to participate in the Pretty Woman soundtrack with the song It Must Have Been Love, Roxette quickly released its third album, Joyride, which met with similar success. Alternating between huge world tours and slightly bitter but always very well produced pop albums (Crash! Boom! Bang ! in 1994, Have a Nice Day in 1999, Room Service in 2001), Roxette now has a place in the history of international variety music. It is estimated that the band has sold at least 70 million albums worldwide since their inception.

And now, a show segment. In the area of pop music, Sweden, which already brought us Abba, now offers us Roxette. Last album: 6 million sold worldwide, and they'll be in Paris on 20 October, at the Zénith. Roxette's recipe for success, Patrick Willard and Thierry Haquet in Stockholm.
(Music)

With one album, Roxette, the Swedish duo, have become show-biz stars. 3 hits and just as many videos to be played on radio stations all over the world. Marie and Per had, for years, successfully scoured Scandinavia. But according to legend, it was a Swedish student that played one of the band's cassettes on a Minneapolis radio station, in the United States, that was therefore able to trigger this huge success.
(Music)

[English] It's extremely hard to make an international breakthrough coming from a small country like Sweeden. In this business, it's English and American, and that's all, you know. It's really hard to go up and see an art director in New York and say : "Hey, we're sweedish, listen this tape…"
(Music)

Before Roxette, only Abba, after their Eurovision contest victory, had reigned on the hit parades. Roxette is better. Even America loves this shrill pop music. With them, parents are happy: finally, a clean band. 20 years later, Swedish musicians return to the top of the charts.
(Music)

I think it's gone to be very exiting, I mean of course to come to play for instance Australia or South America, everywhere… Of course that's very exciting, but also very tiring. But we have a realy good group of people around us. So it's feel good.
(Music)

Their first world tour is a risky and difficult bet. The Roxette band will have to prove that their music holds its own on stage as much as on record, and not just in their Swedish backyard.
(Music)