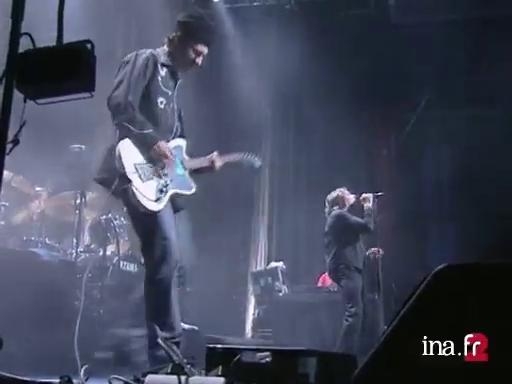 Portrait of the Belgian singer Arno: between two concert clips, Arno explains what makes him continue this profession.

Born the 21st of May 1949 in Ostend, Arnaud Charles Ernest Hintjens, called Arno, a Flemish French speaker, made his first steps into music throughout the 70s beside Paul Decouter with whom he founded TC Matic, one of the key groups of alternative European rock in the 1980s.

It was in 1986 that he decided to launch his solo career with his first album (Arno), soon followed by Charlatan in 1988 and Ratata in 90. A hoarse voice, soaked in alcohol, a honky-tonk rock that's crossbred, zipping from avant-garde to traditional song: Arno incessantly imposes his singular universe and his unexpected covers of old classics (Les Filles du bord de mer by Adamo in 93 on the record Idiots savants) leave their impression. In 1995 the singer released his first record that was entirely in French, A la Française and his title My Mother's Eyes was a best-seller. Alternating between resolutely rock collective projects (Charles and the White Trash Blues) and "multilingual" records (A poil commercial in 1999, Arno Charles Ernest in 2002), Arno recorded in French again on the album French Bazaar which won a Victoire de la Musique in 2005 in the category "Best pop rock album of the year".

Acknowledged from then on as a living legend of European rock, Arno has recently released Jus de Box which is a veritable hymn to multilingualism and the mixing of genres as well as a compilation of his best covers of great heritage classics (Cocktail Covers).

Belgian singer Arno is on tour since October, a diamond in the rough. People introduce him as a sort of hybrid mix that's a descendent of Dylan, the Stones and Iggy Pop. Personal, baroque, whimsical, he sings melancholy. Françoise Roy, Jean-François Chevais.

There are jerks everywhere, as well, so I don't have any limits.
(Music)

Arno, the anti-star. Prude, pale, strange, a rough voice, the shattered look of those that passionately live for sea walls, bar counter friendships and sleepless nights, that's what this man's about.

When I was young, I was a jerk as well.
(Music)

He sings blues, ballads, rock, hip hop or Jewish songs from Eastern Europe. Same contrast in his lyrics: he switches from English to French, from laughter to tears, from surrealist dreams to committed thoughts but he's never satisfied.

When I listen to my albums, I'm not very satisfied or happy. There's always something missing to me. And frustration, that's why I'm still making records, meaning that when I'm doing a song or an album that I really like, I stop.
(Music)

A trembling cigarette at his fingertips, Arno, 50 years old, still seems inaccessible, vulnerable, but he's found the cure for all his ailments: his audience and the stage.
(Music)

Before we finish up...