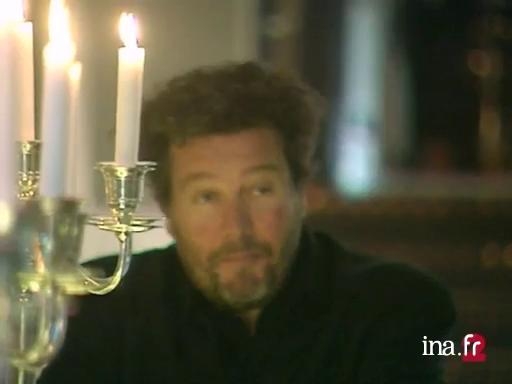 A turbulant, talented character, a jack-of-all-trades, an architect and designer, Philippe Starck is responsible for many contemporary creations. Now, he's interested in decorating a Parisian restaurant, a new source of inspiration for his know-how and his fantasies.

No normal object can escape the sharp eye and bustling imagination of the most popular of French designers, Philippe Starck.

Born in 1949 in Paris, the adolescent was influenced by a father who was a designer in aviation and so became passionate for design which he'd later study at the Nissim de Camondo school. The year paving stones were thrown in Paris (1968) he founded his design firm for inflatable objects and began to sign contracts with Parisian nightclubs to vamp up the decor. His name got around and he made a business from it, Starck Product, in 1979.

One year after his election, the President of the Republic Francois Mitterrand asked him to gently dust down the gold in his private apartment. Starck made the exercise one of his specialities: the Royalton (1988) and Paramount hotels in New York (1990) up to the very classic Hotel Meurice in Paris (2007), he managed to breathe an air of the contemporary into the traditional decor of public or private palaces.

The creator nevertheless aimed at a market that was bigger than just deluxe. To Philippe Starck, promoting the idea of widely accessible design not only satisfies the business leader that he is, but also responds to the wishes of the creative citizens wishing to awaken people to the simple pleasure of objects in respect to their environment. Some of his wavy chairs or off the wall utensils, like his Juicy Salif lemon squeezer for Alessi in 1990, made today one of the cult objects of design creation.

This individual is an unruly, talented jack-of-all-trades. Architect and designer, Philippe Starck's signature graces many contemporary works. Now, he's interested in the decoration of a Parisian restaurant, an object of inspiration for his know-how and his extravagance. Portrait: Antoine Cormery, Didier Rancoeur.

My God, it's beautiful!

16 years after having done the decor of the famous Costes café, at Beaubourg, This time, Philippe Starck moved into the premises of a former flower shop in the 16th district of Paris. There, he created a 250 seat restaurant which he simply named Bon ("good"). But it's a bit trendy, isn't it?

Usually, when people call something trendy, it means that it has a nice decor, a star at the door and shit in the plate. With us, it's the complete opposite: there is no star at the door. However, there's a very beautiful decor and in people's plates, there's a sort of revolution.

After having exposed his designs to the largest number of people possible, with his lamps, toothbrushes, doorknobs and lemon squeezers, Philippe Starck has begun a new challenge: living with organic products, since what's good for the body is good for the spirit. But as a result, we're getting away from design a bit.

And with Starck, we feel that it's his work that fulfills him. In his big office, he's already moved on to something else: hotels being built in London, Marrakech, San Francisco, a Tokyo glasses store, a digital watch and even a television station. This great director of our environment seems to never take the time to breathe.

What for? What would be the point? No, of course not, I don't breathe since it's a drug and my only hobby, my only pleasure, and my only reason to live is to dream. So what's important, is to constantly be dreaming. The day that I stop dreaming, I'll die or disappear. I'll become invisible again.
(Music)