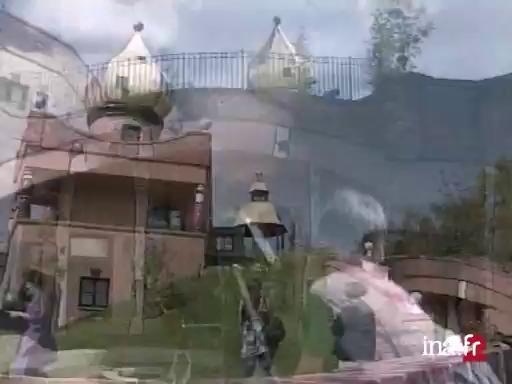 Portrait of the provocative Austrian artist Friedrensreich Hundertwasser, a major figure in contemporary art and in avant-garde architecture.

Austrian Jewish painter, Friedensreich Hundertwasser had to hide in an underground layer, his only refuge against Nazi persecution which affected his people. Despite the underground aspect of the concept, his ideal house painted in 1962 and a thousand windows which opened on the world. The "right to windows" presented during the programmeWunsch Dir Wasin 1972 , demanded the right for all residents to lean out the window and to modify its surround as far as their arms can reach so that it will be visible from afar that "a man lives here".

Childish dreamer, he drew from anonymous architecture in his organic constructions, taking inspiration from his trips to Yemen, Sudan, New Zealand and Iceland. An ardent defender of harmony between nature and humans, he advocated ecology through projects of roofs covered with forests, like hisHigh Prairies House, theResident Treesof Alserbachstrasse in Vienna, the Disarrayed house for lots of trees and lots of people, the Heddernheim Kindergarten or the Kunsthauswien. Opposed to rational architecture that he deemed morally dead, he repainted facades to humanise houses, in the search for fair art that was capable of creating lasting values.

The death of an agitator. Austria's Friedensreich Hundertwasser died at the age of 71. A figure of contemporary art, his extravagance was legendary. Françoise Roy outlines his past for us.
(Music)

Friedensreich Hundertwasser didn't like straight lines, but he was one of the greatest names in Austrian contemporary art. A pioneer of multicoloured facades, twisted windows, roofs filled with green plants and convex floors, he described himself as an architectural doctor and demanded that everyone have the right to build. For this extravagant artist, the linear style was the devil's instrument. An enemy of uniformity, his paintings and his works leaned toward the irrational and abstract.
(Music)

An ardent ecologist, he even built a multicoloured thermal plant for the heating of urban Vienna. A creator of original shapes, all of his life he will have sought to weave a harmonious relationship between art and nature to resolve the traditional contradictions. Dead on the Queen Elizabeth, he was ecologically buried in the Garden of the Happy Deads in New Zealand, his adoptive country.