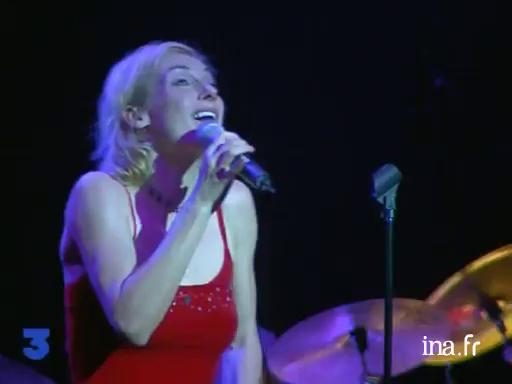 Portrait of German singer Ute Lemper, currently on tour. Footage of the recital and of the Stockholm tour, alternating with an interview with the singer.

Born the 4th of July 1963 in Munster in Germany, Ute Lemper, after her studies at the Academy of dance in Cologne and the Max Reinhardt Dramatic Arts lessons in Vienna, was very quickly noticed while performing the leading roles of great, successful musicals (Cats, in Vienna in 1983 then straightaway Peter Pan in Berlin, Cabaret in Paris in a Jerome Savary production (which earned her a Moliere for the best musical actress in 1986) or even The Blue Angel in Berlin).

She had also led, since 1987, a career as a singer, first devoting several records to the universe of Kurt Weill (Sings Kurt Weill, The Threepenny Opera and The Seven Deadly Sins in 1990) before recording Songbook in 1990 in collaboration with the composer Michael Nyman and in 1992 Illusion, very representative of the eclecticism of her repertoire mixing French songs (Prévert, Piaf), Broadway standards and avant-garde cabaret. In 1996 she published the album Berlin Cabaret Songs, a collection of songs censored by the Nazis. At the turn of the year 2000, she moved to New York and published the ambitious Punishing Kiss that revisited the rock universe of Elvis Costello, Tom Waits and Divine Comedy.

Ever more attracted to composition, Ute Lemper published But One Day in 2002, introducing five of her compositions to pieces by Weill and Eisler and in 2008 Between Yesterday & Tomorrow, the first album by the singer that was completely composed of the original songs.

And now, let's end on a musical note, with Ute Lemper, who, these days, is starting a recital tour in France. In a few years, this German singer has really become a star all over the world. Portrait by Thierry Stampfler and Denis Hauville.
(Music)

She appeared just like that, 10 years ago: a big black shape bringing the most brilliant German songs back to life.
(Music)

But no one will ever be able to shoehorn Ute Lemper into just one genre.
(Music)

She hasn't stopped evolving since then.

I carved myself a niche with theatrical songs. And now, I've really developed in other areas, not just the area of German songs from the 1920s. And it's good that audiences have been keeping up with me.
(Music)

This time, it's almost in a rock music format that she's travelling the world.

It's like that every day: another city, another airport.

Ute Lemper likes tours because they feel like a marvelous playground to her.

I've really kept my feet upon the ground and I love joking around, being crazy!
(Music)

She is therefore quite different from the very glamourous image of her album covers.

In life, it's not at all interesting to glamourous. It's not at all a value that I'm pursuing. It's more about being comfortable and free especially.
(Music)

In Stockholm, as in all of the world's big capitals, Ute Lemper attracts an unusually diverse audience that ranges from young trendies to uptight opera enthusiasts.

Sometimes, with old people, you see, when they listen to a new voice because it's lively and it has balls, I love that.
(Music)

Lively and talented, Ute Lemper crushes everything in her path. She'll be in Paris next week.
(applause)