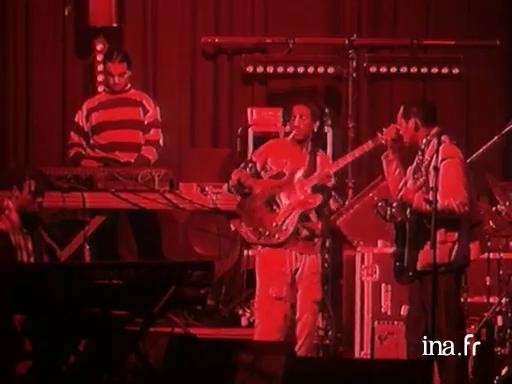 Report on the electronic jazz musician Saint Germain during a concert at the Salle de la Cité in Rennes. Extracts from the concept mixed with a short interview of the musician whose latest album, Tourist, is distributed by the American label Blue Note Records.

Born in St Germain en Laye in 1973, Ludovic Navarre, electronic music composer who was strongly influenced by the original techno from Detroit firmly rooted in black music, went at the turn of the 90s to participate in several recordings under the pseudonym Sub System, Deepside, Nuages and even Soofle.

But it was in 1993 under the name of Saint Germain (a double reference to his and the mythical Parisian quarter of St Germain des Prés, a high place of jazz in the 1950s), that he would finally meet with success. His first record Boulevard, a cunning mix of the British Deep House and Acid Jazz brought the audience on board and the critics too (he was voted "best album of the year 95" by the British press). Saint Germain appeared in 1999 with a more techno album, From Detroit to Saint Germain, the compilation of several titles edited by Navarre under his old pseudonyms taking into account his stylistic evolution.

There was then a wait until 2001 for his first record from the legendary jazz label Blue Note, Tourist to see Saint Germain give a resolutely Nu Jazz Electro sound following the album Boulevard. In 2002 he released the album Chaos, the soundtrack to the eponymous film by Coline Serreau. Today he is considered as one of the best French musicians on the international House scene.

Time for rockers to leave, the city's hall is changing into a jazz club.
(Music)

On the front of the stage, professional black musicians, a keyboard player, saxophone player, guitarist and percussionist.
(Music)

In the background, the sound of the electronic machines run by Ludovic Navarre, also known as Saint-Germain. An instrumental mix called "house jazz", very hip, Saint-Germain received a gold record in France and is one of the foreign ambassadors of this French touch, French electronic music.

Well, I'm basically playing the role of a conductor. I also bring modern sounds and a more modern, less traditional structure I would say, and a mix of a bit of everything. There are West Indians, there are Africans, Brazilians. And so, you have to manage everyone a bit, manage the musicians, the conductor, it means what it means.

Although Saint-Germain's album is called "Touriste", their new contract with American jazz label Bluenote and tonight's presence of genuine musicians in Rennes are here to erase this purely discographic term.