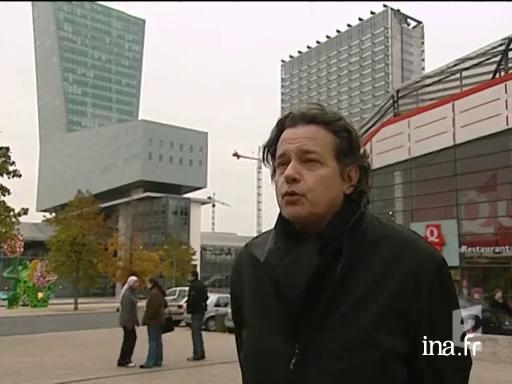 In the framework of Lille's 2004 cultural events, an exhibit is dedicated to the work of architect Christian de Portzamparc. Accompanied by a young architecture student, the latter comments on a few of his previous works.

After having studied painting and architecture at Beaux-Arts de Paris in the workshops of Eugene Beaudouin and George Candilis, Christian de Portzamparc brought into question the modernist doctrines, mainly that of "tabula rasa". He worked in 1970 in the psychology group brought together by Jacqueline Palmade on the lives of inhabitants of new cities, which sought through its research for the Corda: "significant units in the town". He turned toward the study of public spaces and urbanism with Antoine Grumbach. His first project, a water-tower in Marne-la-Vallée, was built in the middle of a roundabout.

The 210 apartments on rue des Hautes Formes incarnate the image of the modern contextual town capable of being embedded in continuity in the existing fabric. The development of the "open islet" concept, opposed to the Haussmanian block and to the open plan of the great sites, imposes the idea of the empty as form in towns. The development zone Paris Rive Gauche illustrates this fragmented urbanity with carefully placed open spaces and hierarchic public spaces. He has completed among others the Philharmonic in Luxembourg, the headquarters of Le Monde in Paris, the French embassy in Berlin, the LVMH tower in NYC, the Euralille Tower in Lille, the Cité de la Musique in Paris. First French person to have received the Pritzker Prize in 1994, he would be awarded the Grand Prix de l'Urbanisme and two Equerres d'Argent among others.

Although Lille 2004 is closing its doors, the last events will remain available to the public until the end of the year, like this exhibit of architect Christian de Portzamparc, one of the greatest creators of architectural and urban art. Daniel Wolfromm,

Christian de Portzamparc, the man in black, is the architect of this tower with the strange outline.

What do you think about this building?

This type of architecture doesn't really appeal to me.

Because I'm not very modern.

It seems difficult to get the French to appreciate contemporary architecture, even here in Lille, the European metropolis, where a TGV train station passes through the heart of a new neighborhood under the building.

I think that it seems to come from the sky or that it floats, in any case, I tried to make it seem weightless, even though it weighs several tons.

The Lille exhibit dedicated to his work illustrates other towers of his, erected in New York or at La Défense.

[...] public that will arrive there on the footbridge which will link to [misunderstood]. I don't think that's as good...

Private lesson for a student passing through. You would also like to build upwards now?

And when I was a student, I didn't think that I'd ever make any.

I don't know. I thought it was a simplistic affirmation of the ego, a bit vulgar.

But there aren't just towers, Christian de Portzamparc builds entire neighborhoods. Here in Peking, a quickly expaning urbanisation reserved for the rich must be contained.

Each island is rather small, and over time, some buildings will be for people that are less wealthy, the richest ones will want to go elsewhere. All of this can be resold, transformed, such-and-such place can become a school. There is a possibility for flexibility in the future that is the basis of any city.

Currently under construction, this music estate of Rio de Janeiro, a building set between the sea and mountains, or, between the rich and the poor, not to separate them but to try to connect them.