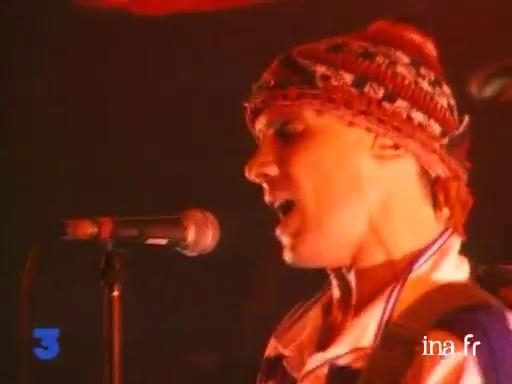 The day after the Manu Chao concert at La Halle de la Villette in Paris, portrait of a political musician with global success, a symbol of anti-globalisation. Commentary over images by Manu Chao in Mexico at Tijuana and an extract from the music video from Me gustas tu mixed with comments from the audience and interviews with Manu Chao, first in Mexico to talk about the sounds that he's created, then in Gênes in July 2001 where he denounces a certain economic dictatorship of the moment.

Born the 21st of June 1961 to Spanish parents, Manu Chao - having just graduated - threw himself into music, participating actively in a multitude of groups renewing the French rock scene at the beginning of the 80s. A mixed influence of punk, rockabilly, reggae and latin music, Chao accompanied by his brother Antoine, founded Mano Negra in 1987 who, with a handful of records (Patchanka in 1988, King of Bongo in 1991 and Casa Babylon in 1994) impose themselves as the spearhead of alternative French rock.

It was with the breakup of the group in 1994 that Manu Chao decided to launch a solo career. At the end of a long trip around the world (Africa and South America), he released in 1998 Clandestino, an album in the form of a logbook placed under the sign of hybridisation and crossbreeding of styles. This music both intimate and open for all cultures of the world found its audience (the album sold over 3 million copies) and Chao became not only an internationally recognized artist but, progressively more implicated in the alter-globalist movement, a sort of counterculture icon, notably in South America.

In 2001 Chao released the album Proxima Estacion: Esperanza, the natural progression of Clandestino and headed out on the roads of the whole world with his group Radio Bemba. His last album La Radiolina, a lot more rock and electric, seems to tie in with the Mano Negra spirit once again.

He's a citizen of the world that rallies against globalisation. But he doesn't use slogans, just songs. In a few months, Manu Chao has become a symbol, and his last album was a planetary success. He sold more than a million and a half copies of it, his concerts are sold-out. He was in Paris last night after a tour throughout France that lasted over four months. Sabine Gorny, Jean-Pierre Heckman.
(Music)

His distinctive trait, that strange bonnet and the very singular telescoping of sounds. Manu Chao, he's Latin tempo in the flesh. A music that's coloured with the sun, reggae, salsa and fiesta.

Very danceable, I mean, in great shape, alive, really alive. It was great, we leave with a smile on our face. A door to the world, the trip. Look at that, the people don't want to go, I don't care, I have my sleeping bag.

It's the story of a great traveller, quite handy playing with rhythms and words. Paris was too small for him, so he hit the road: Rio, Mexico, searching for bizarre sounds, musical passports.
(Music)

I bring a small microphone and I record here and there, or from videos or from the radio, from the television, or people talking in a bar, or people that are telling me stories. I take things on the spot and fiddle with them.
(Music)

A planetary success, but this warrior of words is able to juggle with popular music, solidarity and revolution. No more than a hundred twenty francs for a concert ticket. Like in the good old days of militant alternative rock music, he has chosen his side. In Gênes, he sang for free next to demonstrators.

There's a certain economic dictatorship going on right now in the world, and this massive dictatorship isn't good for my kids, nor for the future of anyone's kids. If we keep this up, it will be a collective suicide.
(Music)

Through the strength of things, I'm in the process of becoming more and more of a symbol of all this. I'm on the covers of anti-globalisation newspapers, bam! my face.

With more than four million albums sold, Manu Chao still remains at the core of this business system that he never ceases to denounce. And in order to not recover after his tour, the globe-trotting, singing citizen is going to slip away, he's got other people to visit elsewhere.