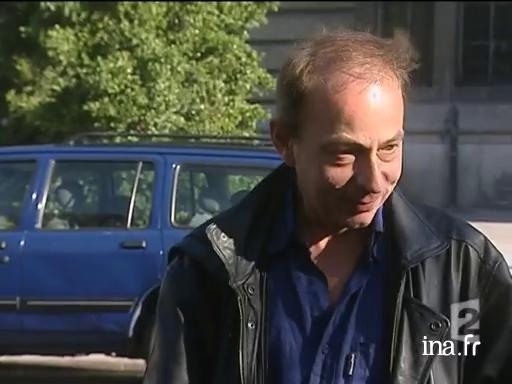 Interview with 2005 Interallié Prize winner Michel Houellebecq, in front of the Lasserre restaurant in Paris.

In 1994, with the publication of Whatever, Michel Houellebecq burst onto the French literature scene, but it was his second novel, Atomised (1998), which brought him renown as well as controversy

. Previously, this native of La Réunion, graduate in agronomy, had only published a collection of articles - Rester vivant (1991) - to poetry books that passed relatively unnoticed - La poursuite du bonheur (1992) and Le Sens du combat, laureate of the Flore prize in 1996 - and an original biography of Howard P. Lovecraft, a writer with the despair and existential solitude that Houellebecq had a particular rapport with (1991). At the same time as Atomised, laureate of the November prize, his quarrels with the review Perpendiculaire and his comments about Islam caused controversy.

Lambasted as much as admired, Houellebecq responded to all those who cried media-masquerade by publishing Platform (2001) and The Possibility of an Island (2005), two novels that seduced and the public as much as the critics - the latter received the Interallié prize in 2006, after having competed for the Goncourt - still without being able to silence his detractors. Today Houellebecq lives in Spain, where the intrigue of The Possibility of an Island took place.

The literary prizes. Michel Houellebecq will not have lost it all. He didn't win the Goncourt prize but he was just awarded the Interallié prize for his latest novel, "The Possibility of an Island", published by Fayard. As you will hear, he describes himself as being rather satisfied. Geneviève Moll, Jean-François Renoux.

He came to Lasserre's with his dog approximately twenty minutes after Jean Ferniot's announcement.

The prize was awarded to Michel Houellebecq for his book "The Possibility of an Island", published by Fayard.

He failed to get the Goncourt but he was nevertheless expecting a prize.

Somehow, it was to be expected.

You mean, you expected to win a prize?

Yes, I expected to win one, one way or another. Otherwise, there would be a sort of shocking illogicality.

Because you believe that your novel is the best one of all?

I have no idea. I haven't read it but I probably represent something in one way or another, you know, a type of transformation, I mean, something that happened.

And when we hear the jury members who voted for him, we have a better understanding.

We get the impression that he isn't content with seizing each day's entire reality and the suffering that goes with it but he has the audacity and the strength to project it in the future, which, in this novel, is in a science fiction setting.

"The Possibility of an Island" is already being translated into 37 languages. Proof that Houellebecq is now considered an important writer all over the world.