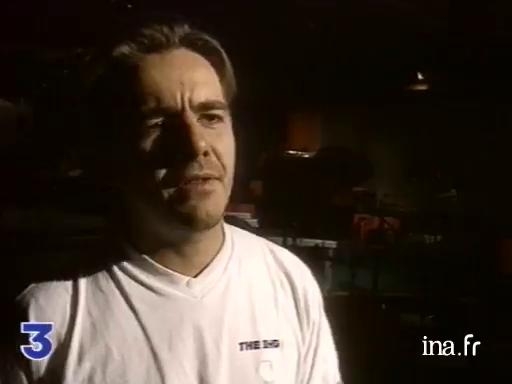 A portrait and interview of the DJ, composer and producer of electronic music Laurent Garnier at a concert he gave at the Olympia, just before the Techno Parade which took place in Paris.

Born at the start of the 1980s in the working-class quarters of the American towns Detroit and Chicago, techno and house is dance and trance music exclusively composed on electronic instruments and essentially based on rhythmic, tribal and repetitive beats. From the end of the 80s, techno (in the generic sense) spread throughout Europe in a network of clubs (Tresor in Berlin, Hacienda in Manchester) and the generalisation of rave parties (huge, wild free-spirited parties bringing together thousands of people in the open nature or in disused industrial places).

First an acid house DJ at the Hacienda under the name of DJ Pedro, then house and techno DJ for the Wake-Up soirées at the Rex Club in Paris, Laurent Garnier (born in Boulogne Billancourt in 1966) is undoubtedly among the pioneers that allowed this genre to have a long-lasting life in France at the beginning of the 90s. A tireless convert, Laurent Garnier continuously worked in different places to create the electro scene as well as bringing together techno and other great forms of popular music.

Thanks to his web radio station Pedro's Broadcasting Basement, his Stereomaniac evenings at the Rex Club advocate mixing and eclecticism as well as publicity stunts like this event at the Olympia, Garnier has allowed electronic music to find its place in the musical landscape of France.

The consecration of techno music, before this weekend's great parade in Paris. The music of an entire generation will be celebrated at the Olympia. Laurent Garnier sizes up the accomplishments he's made in a few years. Report by France 3, Paris region, Xavier Colombier.
(Music)

Yes, I went to go see it yesterday, it wasn't lit up unfortunately, but I must say that it was, it was very powerful you know, it was a very moving time.

Laurent Garnier is happy, and he'll be bringing his techno music to the Olympia Thursday night. The Olympia, a childhood dream for the most famous French DJ in the world. Electronic music, this son of a carnival worker discovered it at the age of twenty-four. A waiter in a restaurant in Brighton in England, he heard a house album freshly arriving from Detroit, USA, the birthplace of techno music. Ten years and one "Victoire" music award later, his music has become the hymn of an entire generation. The pioneer offered himself the temple of made-in-France variety music by performing at the Olympia, which is already completely sold-out.

I'm super excited to be playing there, I'm not going to think about the people who've already played there, I've already thought about them enough. It's true that when I sometimes wake up, I tell myself "damn", the Olympia, it nevertheless represents Piaf, Montand, those are people, those were really the great ones, you know. I feel very small compared to those people. But I don't think that I'm going to think about that on stage Thursday. Thursday, it will be great, well, it's my night, I might never do it again, I don't know, it might be the only night that I get there with my name. I'm going to try to give as much as I can to the audience, that's the most important thing.

As time and albums pass by, his techno reaches out to more accessible landscapes. He's not afraid to sing anymore or to bring in acoustic instruments. His Olympia reserves quite a few surprises on the subject. And fans must rest assured, even if they can't get any more seats, Laurent Garnier will close out Saturday night's techno parade in Nation. Genuine official recognition in the shape of a free general public party, for a style that has become unavoidable.