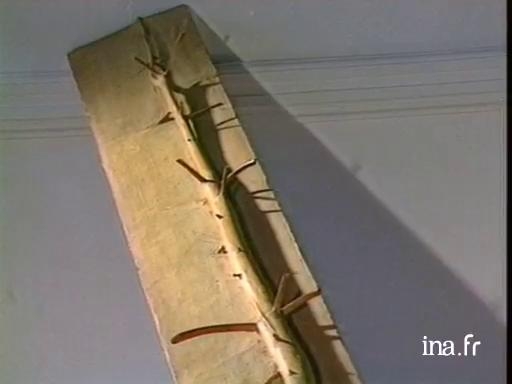 An Italian artistic movement that was anti-establishment and theatrical, Arte Povera, literally "poor art", during the utopian movement of the left in the end of the 1960s. Closer to performance than creation, the actors of this "attitude" favoured the creative process over the finished article.

A perishable, intangible and willingly absurd art, Arte Povera was a reaction to consumer society and the American art market. Anti-pop art, it advocated a return to the essential. By using poor materials like detritus or organic elements, the message of these politicised artists was the emancipation of the economy and of cultural institutions.

The main protagonists were Giovanni Anselmo, Mario Merz, Pino Pascali, Giuseppe Penone, Michelangelo Pistoletto, Gilberto Zorio and the German art critic who came up with the theory, Germano Celant. In their wake, great Plasticiens such as Karel Appel introduced refuse objects into their work.

Arte Povera means art for the poor in Italian. In fact, it reflects an era from 1965 to today. 10 Italian artists are currently exhibiting at La Roche Sur Yon until 10 November. Monique Josselin.
(Music)

Are you surprised? This image just reflects a thought. It seeks to elicit audience participation. This exhibit presents 9 artists, all of which belong to a new movement that was started in Italy several years ago. Arte Povera made its official debut in 1967, but the movement was born two years earlier in the city of Turin.
(Music)

As contemporaries of another famous movement, minimal art, they also abandoned iconography, and are also opposed to conventional art.
(Music)

Here, though, the artist adopts a moral attitude. He asserts a critical position on technology. He adopts natural materials, as opposed to industrial materials and even natural substances which conjure up chemical processes.
(Music)

The branches of this star react to the effect of the copper sulphate.
(Music)

Taken as a whole, this movement started out as a voluntary, intuitive quest for poetic sensitivity.
(Music)