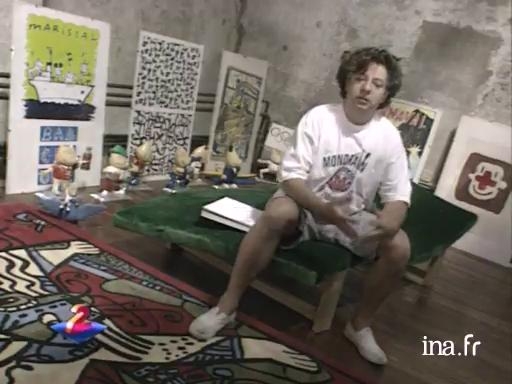 Interview and presentation of the work of Javier Mariscal, graphic designer and creator of the 1992 summer Olympic Games mascot.

Born in Valencia in 1950, Javier Mariscal studied graphic arts in a Barcelona design school in 1970 and started creating characters two years later. His first comic strip publication, El Rrollo Enmascarado, was censored by Franco's government in 1973. Disappointed, he took a break from creating and took advantage of this time to travel, before returning in 1978 with Gran Hotel, an exhibit that helped him gain recognition.

Mariscal started hanging out with interior design celebrities such as Fernando Salas. His orders from customers increased in the 1980s and saw him making furniture and objects for luxury hotels, restaurants and stores in metropolitan Europe. In 1988, he was chosen by the Olympic committee to design the mascot for the upcoming 1992 Barcelona Olympic Games. By creating the Cobi character, he came full circle with his first years of graphic design and became known to an international audience, including children. The little dog, featured in a variety of formats and adapted to all sorts of objects, remains one of the best marketing ideas in the history of the Olympic Game mascots.

Right now, I'd like to introduce you to someone who's already the star of these games. They say that she's already made a lot of money, almost 232 million dollars in three months. This star is the work of a very well known international designer. He's Catalonian. His name is Javier Mariscal. And the star, her name is Cobi. It's a little dog that Jean Peyzieu will now introduce you to.

Cobi, the games' mascot, is everywhere. A stocky build, like the Catalonians, an off-centered nose - as Cubism would require - like Miro and Picasso. Shop owners use her image to sell things, candies for one, other types of objects for another: T-shirts, gifts, stationery. Cobi's drawing is worked on, here, by a dozen graphic artists. Javier Mariscal, who created the character, now conceives comic strip adventures for her. But, how did this mascot end up coming to life?

After Cobi, there was Petra.

In September, it will be the Special Olympics. And I thought about a very positive character that had many problems, really, because in life, it's not nice for someone who doesn't have any arms, but with feet, and the will to carry on, she was able to become completely more than normal, someone great.

Funny furniture. It was them that first introduced people to Mariscal. Since then, he finds the same success with everything else: fitting out of a bar, clothing, plates. A common trait in his creations: naive characters, human or animal, that his fans want. Example in this trendy Barcelona store.

Me, I think that he represents Spanish craziness.

Total craziness for Cobi. Even the railroad company is jumping on the bandwagon. Now it's up to her to make the train seem fun. Foreigners have also caught the bug. This winter, Mariscal will be in Japan. His new project: a game park for children.