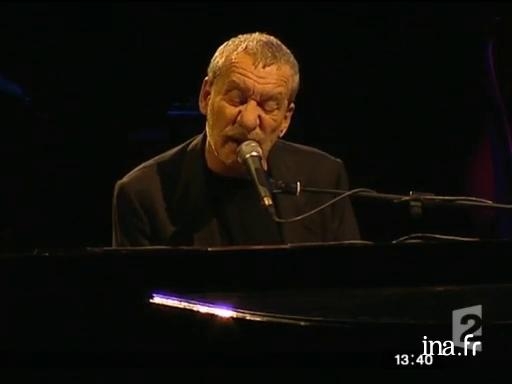 Report on Italian singer Paolo Conte on the occasion of his French tour. The artist brings up the way he writes music and he presents a few songs that he will sing on stage.

Born the 6th of January 1937 in Asti in Piémont, Paolo Conte lived his passion for music throughout the 60s, sharing his time between his career as a lawyer and his talents as a composer that he put at the service of the great names of Italian song like Adriano Celantano (La coppia piu bella del mondo and Azzurro).

It was only in 1974 that he released his first record, soberly titled Paolo Conte and revealed the richness of his universe. His little tragicomic stories told in a very personal spoken-sung style over nonchalant jazzy rhythms found their audience and Conte to devote himself to music. At the beginning of the 80s, he published one after the other Un gelato al limon and Paris Milonga which guaranteed him international renown.

Developing with a lot of charm and self derision, his nostalgic jazzy crooner character, Paolo Conte became the great author composer and performer of Italian song throughout the 1980s. Aguaplano in 1987 is the album that secured his position, especially in France. If in 1990 his record Parole d'amore scritte a macchina was surprising for its hybrid arrangements mixing chorus and electronic sounds, Conte would follow up with a series of albums that were poetically and musically remarkable (Novocento in 1992, Una faccia in Prestito in 1995, Elegia in 2005) with all the elements of his work: limping swing, craggy voice and a distanced humour.

Italian singer Paolo Conte is currently on tour in France. He will be in Paris for the rest of this week, at the Châtelet theatre. He just released a new CD, even though he hadn't written music in several years. Isabelle Baechler, Dominique Bonnet.
(Music)

He has the rough tenderness of a mountain dweller. These words clash like glasses that we toast with, Mr. Conte, the disbarred lawyer, hides behind his songs. It's with music that he's most willing to plead for his cause, because, he says, it reveals less about it than words.
(Music)

The inspiration of music, it's something more secret, that has no face, no colour, just a bit of sound. But, it's more like a dream, it's a story.

As if one could compose without revealing his thoughts. As if this jazzy, bluesy, quaintly bitter nostalgia didn't reveal the man's interior.
(Music)

I start with two, three or four words that, one with the other, start to give a small hint of a story. And afterwards, the story comes according to my inspiration, of course, and I have to work very much.
(Music)

It's this fondness for Italian words that have a rolling "r" that the French delight in. Not to mention the grimaces of this great Italian man who expresses himself nonchalantly.