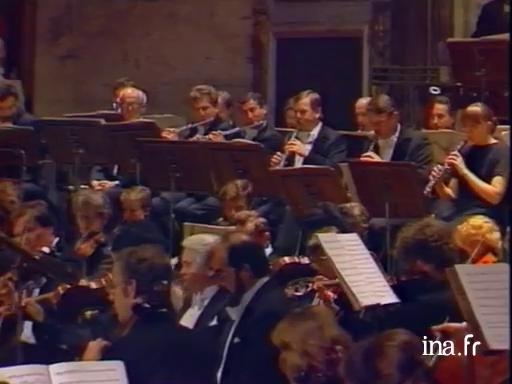 On the occasion of the 20th Chaise Dieu festival, rehearsal of Penderecki's Polish Requiem, interpreted by the Cracow philharmonic orchestra and choir.

Born in 1933 in Debica to a music-loving family, Krzysztof Penderecki studied music at the Krakow Conservatoire and soon became a professor. His works soon followed:Anaklasis,Threnody to the Victims of Hiroshima? His musical language is modern and even brutal, but always expressive. With hisStabat Mater, then hisSt. Luke Passion, or hisDies Irae, he reached the status of international composer. This can be explained by a long evolution: Penderecki's music, which didn't deny previous research, became more lyrical, more easily accessible and it was marked by a return of the religious. He also wrote operas: The Devils of Loudon, Paradise Lost, Ubu Rex and Polish Requiem, eight symphonies to this day, chamber music and numerous vocal pieces... Holder of uncountable awards, Krzysztof Penderecki is one of the major figures of contemporary Polish, and world, music.

And now, the 20th Chaise-Dieu festival. Last night, it benefited from a first in France, namely the "Polish Requiem", from one of Poland's biggest composers today, which really means a lot, Krzysztof Penderecki went to go listen to Stéphane Gaillard.
(Music)

Krzysztof Penderecki rehearsed the entire "Polish Requiem" for the first time in France. In 1983 already, at the Chaise-Dieu, he had in fact presented the "Te Deum". Surrounded by his favourite soloists, the great Polish composer created a work that is part of the great vocal and instrumental tradition. A Requiem played by the Krakow philharmonic orchestra and mixed choir. Krzysztof Penderecki has therefore reached a new contemporary level on the theme of death, filled with faith and hope: a summary of Catholic, Roman, and German romantic traditions, all filled with the Polish national and religious identity. A Polish Requiem that you can interpret as being a major expression of mastery, of Penderecki's themes and style, a Requiem that reflects all the contemporary sensitivity of Polish tradition.
(Music)

[English] In fact, it's the first time that the Requiem is performed in France, though it's already been performed everywhere else, in Italy, in Poland, in the United States. This was the first performance in France. (English) I presented the "Te Deum" here three years ago and I promised Guy Ramona, who manages this festival (English) to perform the first one here. I started writing it in 1980. It was the "Lacrimosa", a piece for soprano. And at that time, I didn't even know that I would write the entire Requiem. I started writing it on the occasion of the construction of the Gdansk monument for solidarity. (English) in December, and then, the following year, when cardinal Wyszynski died in May, I wrote "Agnus Dei", and afterwards, I decided to write the entire Requiem.
(Music)