Jacques Lipchitz at the Palais-Royal gardens 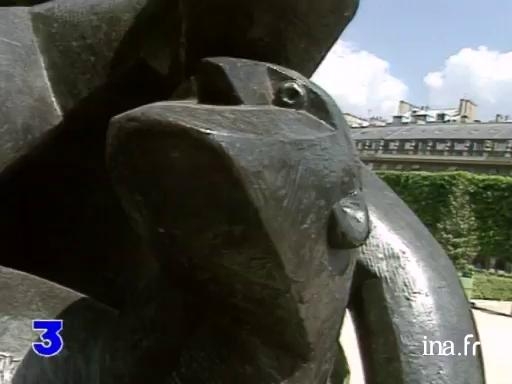 Presentation of Jacques Lipchitz's 23 sculptures exhibited in the Palais-Royal gardens, commented on by the exhibit's commissioner, Solange Auzias de Turenne. Influenced by cubism, this sculptor from Lithuania who moved to Paris, invented the concept of transparent sculptures, and found his inspiration in his daily concerns, as is the case with Joie de Vivre which he created for his sick sister.

Chaim Jacob Lipchitz, known as Jacques Lipchitz (1891, Druskieniki - 1973, Capri) left Lithuania for Paris in 1909. He joined the Fine-Arts then the Académie Julian in Montparnasse. He first took an interest in Greek, Egyptian and Roman art then was very soon won over by the artistic emulation that cubism generated. He met Picasso through the Mexican Diego Rivera and partnered himself with the Spaniard Juan Gris. In pre-war Paris, he mixed with the young artistic circle, Apollinaire, Chagall, Soutine, Modigliani.

A convinced artist, he cut himself off from the revenues that assured his contract with the art merchant Léonce Rosenberg in 1920 so as never to create from commission again. Becoming a French citizen in 1924, he introduced an innovative element into his work: transparency. His "open sculptures" freed interior spaces and dealt with themes that arose from his private life.

Lipchitz engaged himself artistically against fascism by creating hisDavid and Goliathin 1933. The monumental sculpture expressed, according to him, "[his] hate for fascism and [his] conviction that David of freedom would triumph over the Goliath of oppression." Lipchitz hid at the start of the war, to finally emigrate to New York in 1941, where his work would continue to express his opposition to Nazism. He became an American citizen in 1958, before living in Italy.

A committed artist at the Palais Royal. Jacques Lipchitz's sculptures are extremely imposing in the garden's alleys. At the beginning of the century, this Lithuanian came to settle in Paris. He started out with cubism. A friend of Max Jacob, Radiguet and Modigliani, he created transparent sculptures. His works invent a new space, light passes through them, the shapes mix together to give movement all of its diversity.

Here, we present twenty three, twenty three of Libchitz's sculptures which are amongst his greatest works. And Lipchitz is a very important sculptor who first adopted cubism and was very impressed by Picasso and Lawrence. Afterwards, he led a great struggle because he always associated his personal daily life with his work.
(Music)

Lipchitz's sculptures reflect his daily preoccupations. For example, he created Joie de Vivre for his sick sister in hopes that it would bring her spirits up. Art that comes from the street, not just any art, mind you, to offer this exhibition to Parisians, and it's a first for the Palais Royal gardens.