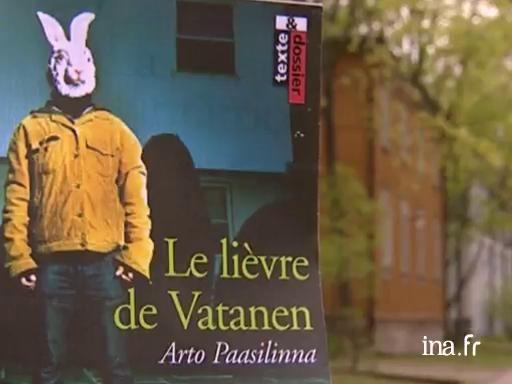 Presentation, in the streets of Helsinki, of The Year of the Hare, the book by Finland's Arto Paasilinna.

Arto Paasilinna (born in 1942) is a Finnish writer, author of several novels and short stories translated in over 20 languages. His parents, fleeing the Nazi army, left Finland for Lapland. From a young age he worked several jobs, such as forestry worker and farm hand, until 20 years old. He then took up his studies, to become a journalist in a regional daily. He began to write in 1975, poetry, novels and scripts. He had great success notably thanks to his novel Le Lièvre de Vatanen (1975) Which would be adapted for the cinema twice.

His novels, among which Petits suicides entre amis (2003), La Douce empoisonneuse (2001) or even Le Bestial seviteur du pasteur Huuskonnen (2007), are characterised by a bittersweet and burlesque sense of humour. The action, always in Finland, leaves a lot to fantasy and the unexpected. Nature also plays an essential role; Paasilinna's novels are often labelled "ecological humour novels". Today he lives near Helsinki.

We are not well acquainted with Finnish literature, this country as large as two thirds the size of France, and inhabited by some six million inhabitants. There are even two official languages here, Finnish and Swedish. Finnish, which is the large majority, is particularly disarming for us. It is not a romance language, and it forms along with Basque and Hungarian, a specific linguistic group. In order to initiate oneself with Finnish letters our young reader - though not limited to the young - must read Aarto Paasilinna's novel "The Vatanen Hare" which is published by Gallimard in livre de poche. "The Vatanen Hare" was published about twenty years ago, was translated into a variety of languages, made into film, and is now a classic. The work of a Lapp born in 1942 near the arctic circle, and who was a lumberjack before becoming a journalist. Two troubled men were driving in a car. The setting sun hurt their eyes, streaming through the dusty windscreen. It was the Saint-John summer, on the little sandy road, the Finnish landscape rolled under their weary gaze, neither of which was paying attention to the beauty of the evening. It was a Journalist and photographer on duty, two cynical and miserable creatures. They were nearing their forties, and the hopes that they had cherished in their youth were far, very far from being realized. They were married, cheated on, disappointed, and had each had the beginning of a stomach ulcer, not mention many other daily troubles. The photographer, behind the steering wheel of the car, saw a small animal on the road but his groggy brain was not able to react quickly enough, and he was unable to avoid it, A dusty shoes hit the brake hard, but too late, the terrified animal jumped in front of the hood, and there was a loud bang when it hit the edge of the windscreen, before flying into the woods. Vatanen, the Journalist, goes into the woods in order to find the animal. He finds it and cares for it, adopts it, and all of a sudden, he cuts ties with his family and does not return home. With his companion, they embark on a journey across Finland riddled with stunning encounters, such as that with an enlightened police commissioner, or the priest whom the hare exasperates with his air of being able to understand human speech. One day, the 2 companions decide to cross the Soviet border. They are imprisoned, but they escape, for the journey to freedom that this novel applauds is never impeded.
(Music)