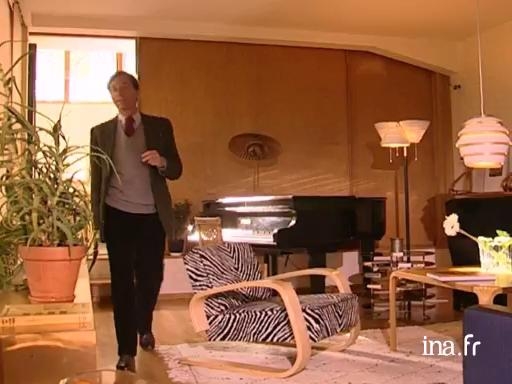 Presentation of a book dedicated to designs by Finland's Alvar Aalto, who happens to be a renowned architect.

Founding figure of new Finnish design and humanist architect of international renown, Alvar Aalto was discovered in 1941 by the architecture historian Siegfried Giedon. Graduated in 1921 from the Helsinki University of Technology, he opened his agency with his wife Aino Marsio. The couple experimented with wood techniques for ply, bent and pasted, helped by the technical director of a wooden furniture factory, Otto Korhonen. They filed many patents for plywood bending. These discoveries led them to a series of seat bases in L, Y and fanned out shapes. Advocates of "gesamtkunstwerk", with the Sanatorium de Paimio in 1929 he started a total project where all the furniture would come from his workshop, in a process like that of Frank Lloyd Wright. The Viipuri library would be equipped with stackable stool N°60. His creations, exhibited in London, brought great success which encouraged him to found the company Artek. To this day it still publishes his furniture and promotes young creators like Vesa Damski. With his second wife, Elissa Makiniemi, he concentrated more on town planning while pursuing his projects in Finland.

In architecture, like in furniture design, textiles and glasswork, Aalto showed a functionalism equipped with a very great formal liberty, creating fluid, organic and continuous spaces, caring for the structures, materials and details in a concern over the global harmony with the site. He profoundly influenced Charles and Ray Eames.

It is the great name of Finnish architecture. Born in 1898, disappeared in 1976, Alvar Aalto opened his architecture office with his wife Aino, in the early 1920s. He taught after the war at the prestigious MIT - the Massachusetts Institute of Technology - in the United States, and received almost every possible academic distinction. With incredible prolixity, he built throughout Northern Europe churches resembling factories, stadiums resembling sanatoriums, and buildings that resembled museums. But he was above all an avant-garde designer, and it is to this part of his life that a highly illustrated volume of his work, translated into French and published by Gallimard, is dedicated.
(Music)

Alvar Aalto did not present himself as a designer but as an architect. "My furniture are only elements within architectural projects, he wrote. They must not contrast with the comedy or tragedy of human life."
(Music)

As early as 1929, he met his colleagues with this perspective, the Le Corbusier, Gropius, [Molinagi]. He designed the Finnish pavilion at the Paris World Exposition in 1937, and two years later, the interior for the exposition in New York.
(Music)

Architecture and design are intimately linked for Avar Aalto. He conceived of chairs and vases that have become classics, he insisted on daily use furniture, and on natural light, he invented the chair feet to which he ascribed the letters X, L, Y, H. For him, wood, glass, are predilection materials but they are also domestic products, products from his own country, Finland.
(Music)