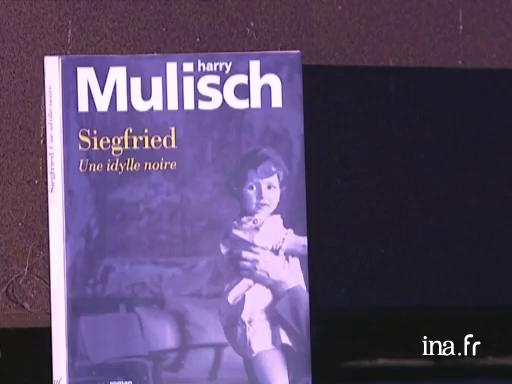 Presentation of the novel Siegfried by Harry Mulisch, who is currently the most renowned Dutch writer.

Harry Mulisch (born in 1927) had a complicated childhood: he was the son of a German Jewish mother and a father employed in a Nazi bank. It was nevertheless his father's sympathies with the Nazis that allowed him to avoid having his wife and son deported.

Self-taught, Harry Mulisch published his first novel, Archibald Strohalm, of mystical mysticism inspiration, which mixed real and supernatural elements in 1952. The Second World War remained a defining experience in Mulisch's life: he writes of it in The Stone Bridal Bed (1959), The Assault (1982) - the first Dutch novels to have sold over a million copies throughout the world and adapted for the cinema in 1986 - and even Siegfried( 2000). He also wrote an essay on the Eichmann trial in Case 40/61 in 1961.

His writing mixed fiction, theology (The Procedure, in 1998, interrogates the reader about the origin of the creation of the world) and philosophy. In 2007, his novel The Discovery of Heaven was voted the best Dutch novel of all time.

Born in 1927, Harry Mulisch is probably the most well-known Dutch novelists today. A dozen or so of his books have been translated into French, the latest of which "Siegfried", published by Gallimard, will not fail to engage the reader, at least by its subject. Rudolph Herter, a famous Dutch novelist arrives in Vienna for a conference. At the airport, he is welcomed by one of his compatriots. "There is what he liked in the Dutch, good spirits. In the innumerable conferences that he had attended on literature or literary politics, each, said in passing, as useless as the other, the atmosphere was always most relaxed at the heart of the Dutch delegations. Whereas the Germans and the French met in the evening, as serious as priests, in order to devise their strategy for the following day, the Dutch always formed a joyful group. A parliamentarian friend had confided in him once that even during the Councils of Ministers, they often gave in to raucous laughter." Yes, good spirits if you will. The day before his conference, Herter was interviews by the television. To understand Hitler, only fiction can even attempt it. And after the conference, an elderly couple came to find him, Ullrich and Julia Falk. They were once in the service of the Führer and Eva Braun, who had a son: Siegfried, whom they had to kill. Herter is not particularly surprised, contrary to our other readers. Hitler, he explains, was a man impossible to understand, he was a non-person. A short explanation, Herter will die from it.
(Music)