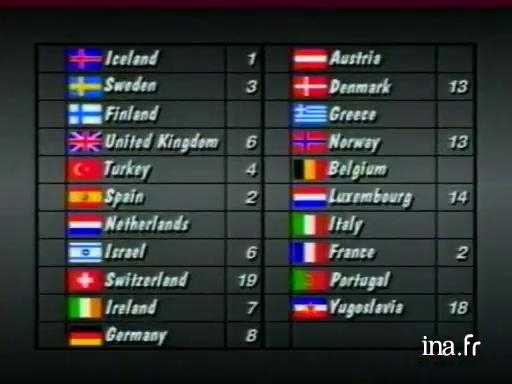 The announcement of the results of the 33rd Eurovision contest which is shown on the general board and the first summary of the top five winners.

The Eurovision Song Contest, created in 1956 in Lugano, is the most famous show broadcast by "Eurovision", the European Broadcasting Union's (EBU) exchange network, whose well-known theme music is Marc-Antoine Charpentier's prelude to Te Deum. This contest, which takes place every year in the country which won the previous edition, is open to all active EBU members, including non-European countries (Israel, Lebanon, Turkey...).

The principle is simple: each country presents a song, sung live by one or more singers (who aren't necessarily from the country being represented, and who don't always sing in the national language(s)); afterwards, the members of each country's jury vote (that's the litany of the "Belgium, ten points; Belgium, ten points..."). The country that collects the most points is the one that wins. It's worth mentioning that the participation and voting rules have often been modified, in response to the increasing number of participating countries, problems with ties, and national rivalries that infringe upon the artistic nature of the competition.