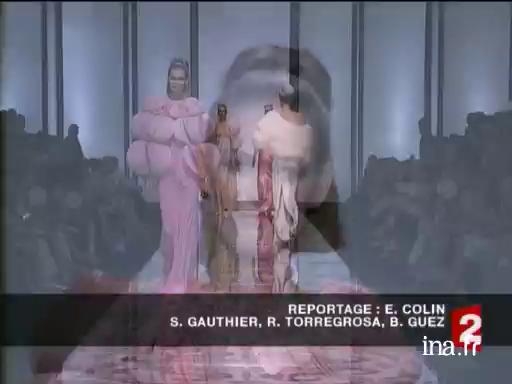 Report dedicated to the 45 year anniversary of Italian clothing designer Valentino, with footage of the fashion show, and interviews with celebrities as well as the designer himself.

As the Hollywood studios conceived her, the femme fatale dressed in long furs, black bustiers on translucent skin and transparent robes. The selected wardrobe for 45 years by Valentino has immortalised this mythical woman, inaccessible and eternally glamorous.

From Italian designer he became a jet set designer when Jackie Kennedy chose his lace dress for her marriage with Aristotle Onassis in 1968. Since Valentino dressed the red carpets, wearing his dresses was enough to gain recognition. From the 1960s to the new millennium, his followers came one after the other: Elizabeth Taylor, Rita Hayworth, Audrey Hepburn, Julia Roberts, Uma Thurman...

Born Valentino Garavani in 1932, the creator studied design in Milan before going to Paris, the nerve centre of fashion. At the beginning of the 1950s, he won a competition organised by the International Wool Secretariat, the competition would also launch the careers of Karl Lagerfeld and Yves Saint-Laurent. After having worked with Guy Laroche, Valentino opened his own fashion house in Rome in 1959. It was in this workshop that he created the famous vermilion dresses, the red so particular that he attached his name to it.

Fashion with a clothing designer who was able to turn his first name into a prestigious brand. Valentino, the Italian designer was celebrating, this weekend, in Rome, the 45th birthday of his house of haute couture. Extravagant festivities with luxurious guests. In Rome, Estelle Colin and Sylvain Gauthier.

Valentino, the first one to walk over the red carpet, a star amongst the stars. Gina, Mick, Farah, all of high society only swears by him. Is he the best?

Listen, of course he is. Of course that he's the best.

Even Armani and Lagerfeld are taking part in the celebration. We've never seen anything like it.

He's someone who's never followed fashion. He's true to himself.

And that's the way it's been since 1968. Jackie Kennedy married Aristote Onassis. She wore a Valentino dress. The myth was launched. Little Valentino Garavani imposes his style of glamour, his tan, his impeccable blow dried hair and his red, this incendiary vermilion which the designer has practically now patented.

It was so obvious that, in every collection, I used red in it, and then, all the fabric makers immediately called the red Valentino, because I, I always used this shade of red.

Strict, disciplined, stubborn for perfection, the designer is, today, at the summit of his career.

This is what brings me great joy and especially lots of strength to carry on. And these last few years, I've really been like a bulldozer.

How old are you?

Age isn't something we talk about. You know, especially in France, we don't talk about it. In Italy, every 5 minutes... but you know it. You open up a magazine and you find my age.

76 years old. A nice age for entering the museum. A tribute a bit like those for poets.

[English] His clothes are so elegant, so feminine. It's almost a privilege to wear them.

Knowing that we're here, in Rome, truly in his home, seeing his house, here, it feels really good.

Valentino lives a very elegant life. I could never imagine him getting out of his bathroom with a piece of toast in his hands. With him, everything is perfect, and that's what we want.
(Musique)

His style: majestic, royal, like Valentino's world is, where everything that shines is made of massive gold, preferably overlayed in diamonds.
(Musique)

Everything is fluid, everything flows from the source, a bit like his inspiration.

It's almost ridiculous to talk about it. I can design a collection in a few days.

He says that he'll stop when he's had enough, basically never.