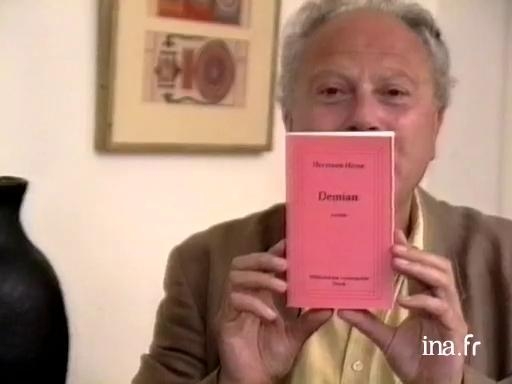 Michel Polac presents Hermann Hesse's Demian, a novel that he read in a sanatorium at age twenty. Demian is an introductory novel where the hero learns how to confront his inner chaos to find himself and accomplish his destiny.

Hermann Hesse was born in 1877 in Calw (Germany) and died in 1962 in Montagnola, in Switzerland. Born to a family of missionaries, he entered the seminary but left shortly afterwards. Solitary and depressed, he worked in small publishing houses: he read frequently and started to write - poems and prose texts. From 1904 on, he earned a living from his writing, got married, and published Beneath the Wheel (1906) and Gertrude (1910). Unhappy with his relationship, he travelled to Ceylan and Indonesia in 1911, which influenced his future work.

During the war, Hesse published an article in a newspaper, requesting that German intellectuals not take part in nationalist disputes. This was a turning point: strongly criticised by the intelligentsia and confronted with serious family problems, Hesse began psychiatric treatment and became close with Carl Jung. Under his influence, he wrote Demian (1917), the story of a young man who sets off to learn about himself. After the war, he definitely settled in Switzerland and remarried. He published Siddharta in 1922, and Steppenwolf in 1927. During the 1930s, he took a stand against the Nazi regime, and started working on the significant The Glass Bead Game book.

In 1946, he received the Nobel Prize in Literature. Having become a model for German youth, thanks to his refusal of Nazism and the importance of his work, which was marked by spirituality and the search for one's self, he spent his remaining days at Montagnola, but no longer wrote novels. Today, Hermann Hesse remains one of the world's most read authors.

Good evening. I would like to pay tribute to the "Bibliothèque Cosmopolite". Under this pink cover, many masterpieces were published, translated from every country in the world. They are published by Stock, and Stock publishing are going through a difficult time because their owners, Hachette, are also having difficulties because they spent too much money on television and not enough on literature. Hermann Hesse is hardly known in France. He's a German writer that became a Swiss citizen after the 1914-1918 war. He was an opponent of the German war-mongering and he communicated with Romain Rolland over this. He was opposed to Nazism, and in 1946, he received the Nobel Prize in Literature. It was after his death (I believe he died in 1962) that he became famous in the United States. We would read "Siddharta", "Steppenwolf" and "Demian" on campuses in 1968. Personally, I also really like "Knulp" which was published by Calmann Levy, and which always reminds me of "Boudu Saved from Drowning". If I'm talking to you about "Demian" tonight, it's because this book was important to me during a difficult period. I was 19, and I was reclining in a sanatorium for 6 months. I devoured all of Dostoïevski's works. And my friends would send me books. I read and I wrote all day long. And it was Jacques Brenner that sent me "Demian". "Demian" is a novel for training, a novel for learning, as the Germans would say. The hero is a young boy living in provincial conservative Germany before 1914. His father is a pastor. He goes through the problems of puberty, doesn't dare talk to anyone, isolates himself in his lies and his solitude until he meets a boy, in secondary school, that is more mature than him, Max Demian. Moreover, he grants him powers that Demian probably doesn't have, and he sees him like a gift of telepathy. And Demian will introduce him to his philosophy. He tells him: "But don't be afraid at all of everything that's dark in you. The world isn't made of good and bad. There is no Devil and no God. When you get down to it, there's only positive and negative. And it's through learning how to use these contradictory powers that you will get the courage to be yourself". So, it's a Nietzchean "beyond the good and the bad" philosophy, but at that age, I hadn't read Nietzche, and I think that there are young people who, today, can be moved by reading "Demian", like I was. So I reread it for the show. I now found the book to be a bit outdated, the style a bit old-fashioned. But I'm no longer 20 years old and the problems touched upon in this book probably relate to me less. But in any case, if I am what I am, whether good or bad, and I'm bad, it's because I was affected by this book when I was 19, 20 years old. And I think that today, many young people don't read to pass the time, but rather because they're looking for answers to their questions, because there is something in this world that worries them and that they don't understand, and it was one of my books that perhaps helped me pave the way to the truth and that will perhaps help them to find their way. It's Hermann Hesse's "Demian", published by Stock, but you can also find it in the Pocket Book series.
(Music)
(Silence)