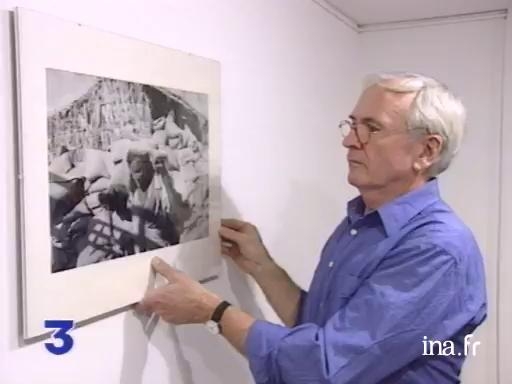 Portrait and interview with photographer and film-maker Johan van der Keuken, guest of honour at the Mois de la Photo in Paris. This photographer has never stopped working on forms and light, through very eclectic subjects of nude photographs from the Chechnya war. He's also made about fifty documentaries such as Amsterdam, Global Village, which we see an excerpt from.

Dying in Amsterdam in 2001 where he was born in 1938, Johan van der Keuken was a Dutch photographer and filmmaker whose very productive career lasted over 40 years. He began photography at the age of 12 and at 17 years old published his first photograph collection. From 1956 to 1958 he took lessons at the IDEHC (Institute for Higher Cinematographic Studies, Paris) and took advantage of this trip to photograph the capital's streets.

Following that, he began creating several documentary films, over 50 in the course of his life, often award winning. At the same time, he continued his activity as a photographer, published texts about photography and cinema in different magazines, wrote a column in the cinematographic review Skrien and gave conferences about cinema.

He travelled the world with his wife who held the microphone while he filmed reality, without exhibitionism. Commenting on the three documentaries of the North-South ensemble, he declared in 1974, "The feeling I had throughout filming was: I too could have been a black schoolboy from Cameroon, or a prematurely ageing retarded woman in a ghetto in Columbus, or one of those futureless Indians from the Andes mountains..."

Van Der Keuken's eye. The month of photography, in Paris, has made this Dutch photographer and film-maker its guest of honour. No less than 6 exhibits are dedicated to him. Richard Tripault and Benoît Veran.

Between Johan Van Der Keuken and photography, there's almost a century of passion, a passion that was born in Amsterdam when, at 12 years of age, little Johan discovered photography thanks to his grandfather. Today, at 60 years of age, after having worked with all the visual arts and having travelled the world, he remains fascinated by the power of the negative, this intant shot that reflects reality while leaving room for the artist's personality. From street scenes in La Paz to the female body, Johan Van Der Keuken observes, analyses and photographs all of the feelings that his subjects inspire him. A witness to the war in Chechnya, he uses light to make faces stand out.

What's important, is to show the beauty that these people had, the beauty of this child - if he had lived - in this magnificent light. So, I wanted to say that light is not at all something peripheral.

This light and this search for shapes, which we find in Van Der Keuken's films. Producer of around fifty documentaries, he finds his inspiration in the suffering of the third world, working class neighborhoods and ecology. He therefore adds a cameraman's spontaneity to a photographer's rigour.

There are plenty of activities. So that's what interests me. We did something isolated, and then, around it, there's plenty of things going on that disrupt the uniformity of the information.

Going non-stop from photography to cinema, Johan Van Der Keuken continues to observe the world and testify. He shows us reality and conveys his emotions thanks to the beauty of his scenes.