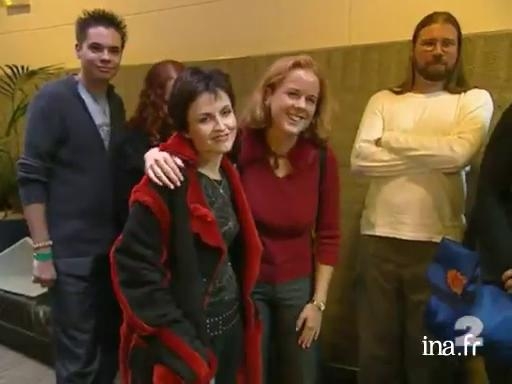 Portrait of Irish band The Cranberries, which met international success in 1994 with their hit, Zombie, and interview with singer and band spokewoman Dolorès O'Riordan.

The Irish rock group created in 1989 by the Hogan brothers (Noel on guitar and Mike on the bass) the Cranberries found their definitive form in 1990 with the arrival of the singer Dolores O'Riordan. If the group received true recognition in their own country very quickly, they had to wait for their first album release Everybody else is doing it in 1993 and the success of the single Linger for the world to discover this lyrical and melodic rock, transfigured by the crystalline voice of O'Riordan.

But it was in 1994 with the song Zombie (a passionate political song that denounced civil war in Northern Ireland), from their second album No Need to Argue, that the Cranberries would find global success. In 1996 the group released its third album To the Faithful Departed which, in more of a rock style, didn't find its audience, then in 1999 Bury the Hatchet which allowed the Cranberries to come right back to the fore but didn't renew their inspiration. A last record Wake Up and Smell the Coffee was released in 2001 and the group gradually broke up through different solo projects without officially splitting.

The Cranberries are releasing their fifth album. These Irish artists have carved themselves a choice spot in the world of pop. Since their debut, they've sold millions of albums. To present their new song, they've organised a private concert which Olivier Lenuzza and Raymond Chapelard attended.
(Music)

They travelled the world for months, across five continents, performing over a hundred shows. A million fans came to cheer Dolores and her musical friends. After a few months of rest, they went back to the studio.
(Music)

The Cranberries, one of the key bands of the international scene, who struck gold, the ultimate prize in 1994 with their hit "Zombie". Today, a new album is released, their fifth, an album recorded in Dublin, their country.

Freedom of thought is essential otherwise you're stuck. You have to write for yourself, it comes from the heart, and that's where you find your inspiration. Pressure is something that you create yourself. Our record company doesn't give us any hassles regarding the writing of our songs.

Time for the presents - Happy Birthday - ten years of existence for a band that accumulates awards. Dozens of gold and platinum records, thirty-two million albums sold along the way, the Cranberries remain true to their roots.

Many have abandoned pop music, guitars, bass, drums. Record companies have turned to young boys and girls that fit a certain format. Fortunately, some bands continue to fight to keep pop music alive and I hope it will inspire others to have the same vocation.
(Music)

In Amsterdam, the Cranberries have offered their fans one of their new songs. The music isn't revolutionary, but the charm is there. These debonaire Ireland natives have simply found their vocation, the one that Delores has in the world of pop.