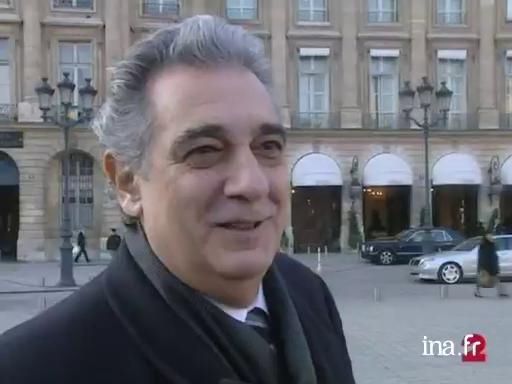 Conversation in Paris with Placido Domingo, the famous tenor, a few hours before he interprets Wagner's Parsifal on stage at the Bastille Opera.

Born in Madrid in 1941, Placido Domingo started out with his parents, Zarzuela singers (a Spanish operetta). He studied music (piano and management) at the National Mexico Conservatory. He made his debut in 1959 and began an especially long and glorious career. Placido Domingo is a phenomenon, his repertoire immense: Wagner, Verdi, Berlioz, Puccini, Handel, Bizet, Mozart, he knows over 120 roles, he can sing in every language and has performed in all the great stages of the world. What's more, since 1973 he has been a conductor. He is the general director of the Washington and Los Angeles operas. He has filmed numerous videos and three operas.

He is the consummate artist. With Carreras and Pavarotti, he has performed in the famous three tenors' concerts. He is the soul of the Operalia competition that helps young singers. Domingo's magnificent voice is large, central, full of sun and like Maria Callas, he's an accomplished actor. Lyrical art of the second half of the 20th century owes him much.

From 6 pm tonight at the Bastille Opera in Paris, Richard Wagner's last opera, "Parsifal", is performed. There will be four other performances of this work which will be given by Placido Domingo. Conversation and report with Dominique Barouch, Daniel Levy and Didier Rancoeur.

Two hours before getting up on stage, Placido Domingo offers himself a surprise walkabout amongst the crowd.
(Silence)

Do you have time for a public life?

A little bit. But I have to take lots of precautions before I have to sing and all that.

A tenor's voice must be used sparingly.
(Music)

In Parsifal, he plays the pure young man that will save the kingdom from the Knights of the Grail. Beyond normal proportions, he plays the role almost simultaneously in Paris and Madrid, after non-stop round trips between Paris and New York, where he conducts.
(Silence)

He's a man that also has physical resources, and phenomenal stamina. His doctor told me in New York, I wrote this anecdote in the book, that he must produce a sort of chemical substance that no one else produces.
(Silence)

For the singer, nothing is magic, but represents a lifetime of work. Placido Domingo is the only tenor today that is capable of going from the sensuality of Italian opera to the cold romanticism of Wagner's testament work. At 60 years of age, he has definitely passed the age limit that he himself had set.

You have to have lots of respect for you and for the public, you know, but if I feel well, I will not sing one day less. Not a day more, but not a day less.
(Music)

All of the seats for Parsifal have already been sold three months ago. The Domingo phenomenon is in as high demand as it is rare.