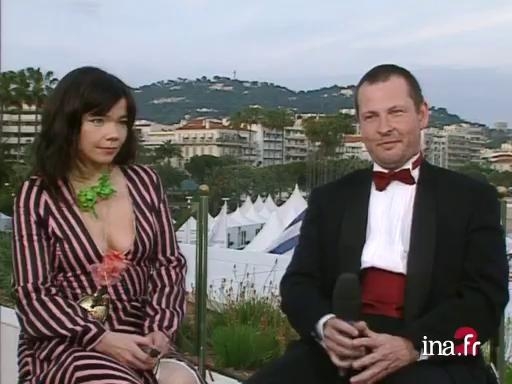 A linkup from Cannes with Lars Von Trier who has just won the Palme d'Or at Cannes for his film Dancer in the Dark and Björk who has won the best actress award.

The film Dancer in the Dark, released in 2000, was the result of a meeting of two explosive talents.

The Danish director Lars von Trier, born in 1956, first made his name by his provocative variations on the genres of film noir (Element of Crime, 1984), thriller (Europa, 1991), television series (The Kingdom, 1994) and mystical melodrama (Breaking the Waves, 1996) before offering The Idiots (1998) respecting the Dogma set out in 1995 with Thomas Vinterberg: and attempts to rid cinema of all aesthetic ambitions by trying to capture raw reality.

The second unusual element was the Icelandic singer Bjork, electro-pop diva, who was the main actress and composer for Dancer in the Dark. A melodrama, musical comedy and social commentary all at once, the film, far from the predetermined principles of Dogma would touch hearts and triumph in Cannes. The story of Selma, and nearly blind immigrant unjustly accused of murder would be a bone of contention between the actress and her director. The disagreements between the technician von Trier and his singer at their wits' end would nevertheless create an exceptional film.

And right now, live from Cannes, we welcome Lars von Trier and Björk, good evening to you both. Lars von Trier, Cannes loves you and demonstrates this. This is the third time that you've won awards here, after the Grand Jury Prize for "Breaking the Waves", now you've won the Golden Palm. Can you tell us about your state of mind, the emotions you felt, which were obvious up on the stage?
(Silence)

So this time, you accepted to come to Cannes unlike last time, did you want to personally stand up for this movie, which you hold dear to your heart?
(Silence)

Well then, the story about what I can or cannot do would be very boring, but this time, I took lots of medication and the valium factory is selling me lots of it.

What do you wish to say to Björk, who is by your side tonight?
(Silence)

Do you hear me? Are you able to hear me? I was asking you, Lars von Trier, what do you wish to say to Björk, who is by your side?

So that was private, very nice. Well, we make a good couple, you'll see us again in ten or twenty years.

We hope so, because the shoot might have been difficult sometimes, I would now like to ask Björk a few questions, Good evening, I know that up until now you've chosen to remain silent, so it's a privilege to have you here tonight, how do you feel, what emotions are you feeling right now?
(Silence)

Well then, I think that I feel a bit like someone who's a visitor, because I've been a musician for so long. And I feel like a fly on the wall, that is observing a very interesting theatre. And I'm quite honoured to have been welcomed so marvellously. I'm a bit shy but I'm very happy. And I'll be happy to be able to drink a bit of champagne afterwards.

I'm sure someone will offer you some, but stay with us for a few moments, who do you wish to dedicate this award to tonight?
(Silence)

Björk, can you hear me?

Yes, I hear you. I would like to say that this award also goes to Ioga and Andrea, if they hadn't been with me, I would probably not have finished the film.

Björk, you took your role very seriously during the shoot, was it painful for you, a pain that you felt and that sometimes made the shoot difficult?
(Silence)

I was playing two roles, in fact, I did the soundtrack, it was very instinctive for me, I've known about it for a very long time and it was a very interesting challenge. And there was a craftsman aspect, and then there was the other side of me which had to be an actress for the first time. And as Lars and I mentioned in the press, the only way to do this was, two years ago, I placed my body and soul in the hands of this woman named Selma, and cell by cell, I became her. And so there was this entire process which happened to be a process of abandonment, that's what Lars wanted as well, the ability to play. So now, we've finished the film, and little by little, my body is becoming Björk again, cell by cell. And I would like to announce that I have become the old Björk again, and I'm thrilled to be back and I'm very grateful.

Pascale Deschamps who is by your side, Pascale?

I would like to ask Lars von Trier a question, your film is a musical tragedy as we've seen, it's a nuclear power plant of emotions, there's a great deal of technical virtuosity. I must also say that it has political weight, a message against the death penalty. At the theatre's exit, for the official screening, there were hundreds of empty "Kleenex" packs there. So, what impact do you want to leave in viewers' minds? Can emotion lead a viewer to reach a truth?
(Silence)

Well, I don't really have a recipe for emotions, I can only make films for myself. And if the public takes a liking to it, then it's a good thing and I'm happy with myself. If you think that it can help you to cry, then do it.

Thanks to both of our guests.