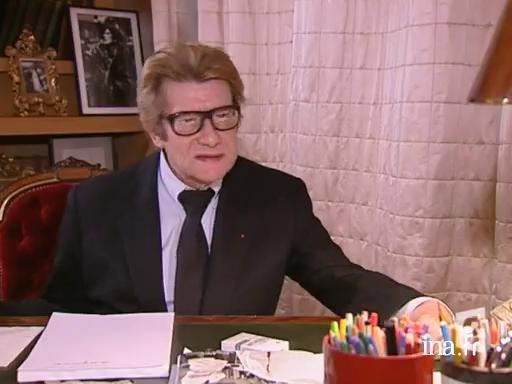 In 2002, Yves Saint Laurent retired after forty years or career, turning a page in fashion's history, that of classic and timeless elegance that managed to revolutionise its era. In 1962, after having worked for Christian Dior, Saint Laurent founded his legendary fashion house with Pierre Bergé.

Born in Oran in 1936, the designer would give his letters of nobility to the colonial Saharan city and would be the first to use black models in his famous androgynous tuxedos, quite audacious in the conservative France of De Gaulle. That was where some of the black-rimmed spectacled designer's great classics emerged, the champion of French chic. Another French icon, Catherine Deneuve would wear his clothes inBelle de jourby Buñuel and would remain his muse.

A player who for a while was quite lost, Yves Saint Laurent preferred to leave the stage faced with a fashion industry where he said he couldn't recognise himself anymore, "frightened" in his own words "by the ridiculous spectacle" put on by his audacious cadets that he rejected such as John Galliano, Alexander McQueen, Thierry Mugler or Jean-Paul Gaultier at the top.

Forty-eight hours before Yves Saint-Laurent's final fashion show, France 2's team was admitted in the most sacred of fashion houses, at the Saint-Laurent house and studios, on Marceau avenue. Everyone speaks of the genious of the master. Yves Saint-Laurent, who generally flees from cameras, was willing to speak with us on this occasion. Report by Estelle Colin, Patrick Descheemaekere.

She was one of his best models, one of these women with a dark beauty that only he knew how to put under the light. Are you shaking?

Yes, I might even cry. But it's an era that's ending. And there will only be one single Mr. Saint-Laurent.

Like Katoucha, all will work for him until the end, even if emotions sometimes overwhelm them. Proud and convinced that they've all experienced something exceptional by his side.

I've been working with him for thirty-seven years, and we'd come in here like we'd enter a religion. I mean, it's true that many people that I've met here have stayed for a very long time.

There's no generation gap here, everyone has the same level of emotion.

Let's just say that we had a beautiful dream before, as long as it was there. There's love between the people, Mr. Saint-Laurent gives us so much human warmth.

His hands gave birth to that which has impacted fashion during almost half a century: chiffon, hangs, embroidery, with the master's eye everywhere. Famous throughout the world, Yves Saint-Laurent is also known for his talent in evading, due to his legendary shyness. Up until the last moment, we didn't know whether or not he'd accept to meet us, and he said yes. If he closes the business, his style, though, will remain.

But in the streets, women are already all in pants, women wear men's overalls, the women are... I've really insisted on this style throughout the years.

And haute couture or not, the Saint-Laurent style will once again cross into the twenty-first century.

If I decided to leave, it's because I can no longer physically stand the anguish. This anguish has progressively grown over the years. And now it's absolutely unbearable.

With him, it's not only the Saint-Laurent house that closes, but an entire chapter in the history of haute couture that is ending.