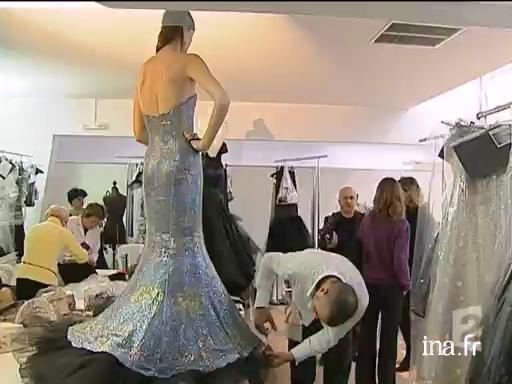 Behind the scenes report of Giorgo Armani's next fashion show, where he's presenting, in Paris, his first haute couture collection, and an interview with the famous Italian clothing designer.

Elegance, classicism, sobriety, Giorgio Armani (1934) is the anti-Versace in the Italian fashion design landscape. Where Latin fashion is openly ostentatious and provocative, the Armani universe prefers the androgynous simplicity of black and white. This refined aesthetic doesn't have a philosophical value. Giorgio Armani has in this way built a prosperous global empire thanks to a breathtaking development of his eponymous brand.

After having worked through every branch of fashion and beauty, from prêt-à-porter to cosmetics, and designer fashion since 2005, the stylist has taken to publishing - Armani Libri -, flowers - Armani Fiori, decoration - Armani Casa, and even deluxe restaurants - Armani Bar and hotellery - Armani Hotels. This eclecticism is doubtlessly what led him from medicine to photography to finally dedicating himself to fashion in the 1960s. This is how he spent a while as a window-dresser in a big name store of Milan fashion, became a stylist with Cerutti and then Ungaro before founding his own brand in 1974.

Tomorrow is the day that the haute couture fashion shows will start. In a preview, Giorgio Armani. This year, the famous Italian designer opens the ceremonies. He chose to leave Milan aside in favour of Paris, the fashion capital. Behind the scenes, Estelle Colin and Olivier Robert.
(noises)

Giorgio Armani, that's him. An athletic silhouette, a silver head of hair, equal parts stylist, CEO and guru. In 30 years, he has become the richest clothing designer in the world. And for good reason. The man has never met with failure. A case study for some, an enigma for others.

I'm 70 years old, everyone knows this, and there hasn't been one interview where at the end I'm not asked: "But now, what are you going to do?".

What's he going to do? He, the ready-to-wear man, will for example introduce his first haute couture collection. So, you can trust him to win this new challenge. He already has a little idea in mind.

The idea of doing a style that doesn't exist. And also, for example, to consider that even if a woman has money, she'll be careful of the price. A few designs that I really liked, worn with a cap like that, very simple, as if it were something that you can't... not taken too seriously. However, it's a very serious dress. It costs a fortune!

This delicious lack of concern hides an implacable perfectionist. His thing: 5 different collections. For each client, a specific model. From the jean to the evening gown, from 100 euros to 65,000. His talent: making sure not to forget anyone. Design, creation, distribution, the man controls every aspect. And that's probably the key to his success. A success that is worth 3 billion euros today.