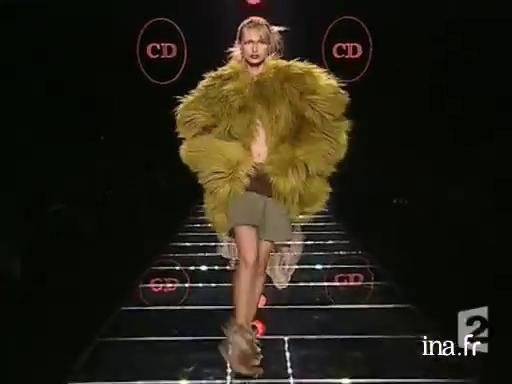 A theatrical character, half bullfighter half privateer, John Galliano knows the codes of the fashion world perfectly and plays along. He's part of a generation of iconoclastic stylists, who in the 90s gave classicism the boot from haute couture.

On a path opened by Jean-Paul Gaultier, John Galliano rushed in with Domenico Dolce and Stefano Gabbana, and Alexander McQueen, who was also trained at the Central St Martins College of Art and design in London. It was in this institution that the man born as Juan Carlos Antonio Galliano in Gibraltar in 1960 forged the style that would characterise him, mixing historical costumes and street fashion. Graduating in 1984, he would become director of creation at Givenchy 11 years later, then in 1997 take the reins of the Dior house, where he tripled turnover. Following the example of Lagerfeld and Chanel, the names Galliano and Dior were from then on inseparable.

The subject of all the praise, even if they're all bunched up together, nobody would dare miss one of the greatest rendez-vous in this week of collections. For the last five years, he is the one who sets the tone for the season.

I'm a bit like a lighter, I light the fire and then it takes off like that.

John Galliano isn't just Dior's madman, he's also the one who knew how to revolutionise one of the biggest luxury institutions. The man has talent and his inspiration comes from far away.

I have a tremendous amount of respect for Mr. Dior's house, and I'm very honest with myself, and I think that what I do is truly in Mr. Dior's spirit.

Do you feel his presence?

Each one of his creations turns into turnover. Collosal turnover that never ceases to increase, more than fifty per cent during the last two months according to in-house sources.
(Music)

I must say, you have to talk about the turnover today in the Dior house. You must see more and more amounts of new clients that are with Dior. You have to see where Dior is today. For me, that's the proof.

The incredible John has therefore decided that there would be lots of sun next winter. He chose to shyly confront his audience with the sobriety of a simple black costume.