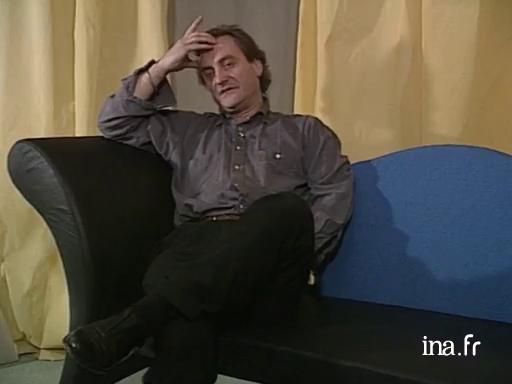 For the first time, designer and architect Borek Sipek's work is presented in France thanks to the Epokhe gallery in Dijon, which dedicates a l'Objet et le Rêve exhibit to him. Following a brief reminder of his career path, Borek Sipek talks about the direction that European architecture needs to take. The artist's projects for the Czech Republic and abroad are brought up.

An unusual artist born in Prague in 1949, Czech Borek Sipek left his mark on contemporary design by proposing creations influenced by Baroque styles and made up of delicate and luxurious patterns. With his vases with rings and handles, his stylised armchairs, he shook up partisans of a purified style.

Having emigrated to Germany after the events of 1968, he studied philosophy and design before moving to Amsterdam in 1983, where he created his own studio. The grandson of a glassworker, Sipek considers this material to be the most demanding means of expression, and so he returned to Czechoslovakia in 1991 to establish a second studio dedicated to glass creation. The artist was firmly decided on creating for the luxury industry, but more than just consumption objects, working with Karl Lagerfeld, for example, who solicited him for his Faubourg Saint-Honoré store in 1993...

His nomination by president Vaclav Havel as the official architect of the Prague Castle in 1992 was the crowning moment of his career. He simultaneously dedicates a great deal of his time to teaching art and architecture in several universities (Prague, Vienna, etc...) and his works are now a part of many museum collections worldwide (New-York, London, Paris, Seoul, Beirut, Tokyo...).

"The Object and the Dream", is the title of an exhibition dedicated to Borek Sipek. an architect designer of Czech origin. He has come to France for the fist time, invited by the Gallery Epokhe in Dijon. Annick Alexandre, Jean-Louis Saintain.

These objects are part of the collections of some of the greatest museums in the world. Architect, his constructions in Europe confound the traditional concepts of interior and exterior. Borek Sipek's visit to Dijon is exceptional. It is due to the determination and conviction of the owner of the Epokhe Gallery.

For me it is magic, poetry, a dream. It is both tradition and the future. that is, he delves into the tradition of the past and innovates at the same time, therefore he is contemporary.

Objects made by Borek Sipek for daily use are always elegant, luxurious, sometimes baroque. like a blink from a memory of times gone by. The furniture is distinguished in its movement, the lightness of the structures, the sinuosity. In front of a group of students from the Fine Arts school in Dijon, Borek Sipek came to talk about his experience. Born in Prague, he left Czechoslovakia in 1968 to live and work in Germany. For the last seven years, he has lived in Amsterdam, where he teaches architecture and at his studio. How does he who loves to absorb the feel of an era experience the crisis that Europe is experiencing today?

[German] It is difficult to indicate the direction that architecture will take. It is obvious that life is less joyful. Architecture will have to take this into account. and become more interested in the content than in the form. I try to explain to students that they are each individuals and that they each retain their own personality.

Projects are not lacking for Borek Sipek: that of the reconstruction of the Castle area in Prague, an art museum near Amsterdam, a Lagerfield shop in Paris. His exhibit is visible at the Epokhe Gallery, rue Verrerie, and at the Fine Arts school, in Dijon, until December 14th.