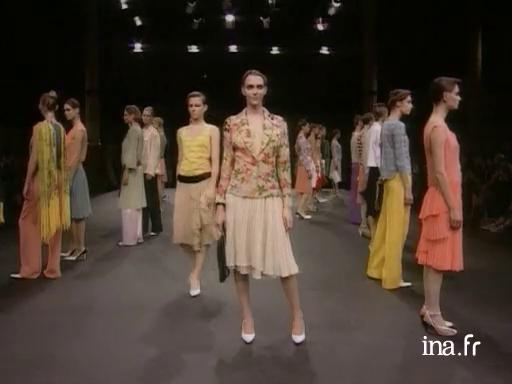 Conversation with Belgian creator Dries Van Noten. He explains the spirit of his 2001 spring/summer collection, and brings up the "Belgian school" of fashion.

A surprisingly discreet person in an exuberant universe of creators, Dries van Noten is a leader in Belgian fashion. Having graduated from the Royal Academy in Anvers in 1981, it wasn't long before he was noticed by the organisers of the British Designer Show in London at a time when Belgian tailors were almost unheard of.

Surrounded by his friends from Anvers, Ann Demeulemeester, Walter Van Beirendonck, Dirk Van Saene, Dirk Bikkembergs and Marina Hee, nicknamed the "band of six", Dries van Noten pierced a breach in a universe that was still dominated by Paris and Milan. Recognition came 15 years later in 2001, Anvers was labelled European capital of fashion.

This designers creations have a history of being influenced by an "ethnic" touch, even if he rejects this term. Nowadays he neglects that mixture but his clothes are still characterised by associations which could become improbable if they weren't so subtle. Passionate for precious fabrics that he contrasts with strict cuts, this man in his 50s has fashion design in his blood, the trade being passed down from father to son for four generations.

The Belgian clothing designer that everyone agrees on is Dries Van Noten.
(Music)

He lives in Anvers and does shows in Paris. At the age of forty-three, he has 500 shops throughout the world, and he sells one hundred thousand pieces a year. Dries Van Noten proves that business and clothing design make a good couple.
(Music)

The light, the podium, all of it yes. The collection, it's inspired by femininity especially, in one way it's a bit sexy but not too much, a bit aggressive on the side, but truly in a "joie de vivre" way. Femininity, it means seduction in a way, it's well-being especially, feeling comfortable with yourself. There is also inspiration that is kind of like from the 1920s, so it's a bit art deco, mixed with printed materials, the colours of a Belgian painter from the beginning of the century whose name was Rik Wouters. So, his work was very colourful, with lots of flowers and things like that.
(Music)

The flowered prints with which we used many different techniques, sometimes they're very complicated techniques, there are the hand-printed prints, there is embroidery. So there are so many colours that are made in a mechanical way, but that look like manual embroidery. We have studios that work on the cloths for us, especially in Italy, in Spain, a few in Lyon.
(Music)

There is especially an atmosphere, first of all, an atmosphere that I try to convey, especially with the materials and the prints and the colours. The colour, the prints, the mix of materials, for me, that's truly the essence of the collection. After that you have the shape that comes through. There are several ways you can see fashion, for me, I see fashion with a very open mind, so I also sometimes design clothing for theatre, for modern dance and things like that. I find it very interesting, I love it.

Dries Van Noten has been charming us, and re-charming us, since the 80s. He comes from the famous Anvers school. He's one of the six, this renowned generation of Belgian clothing designers that are apparently highly backed by their country.

I think that's a misunderstanding, because back home, it's truly a battle just like it is anywhere else. It's true that there's a good school, back in the day it was a very small school, now it's become much larger of course. But like young creators, it's still a battle with the industry, with the government, it's not simple either, it's like everywhere else. There was a state-sponsored contest, like yesterday's contest in France, for example, but in those days it was still a small contest where the first prize was a sum of money, but it wasn't much either. But it was creativity especially that was present and that was looking for a way to express itself. So we really had to sort of struggle to survive and get our collections made. And now, of course, we've created a sort of system with the success of Ann Demeulester and their Belgian creators, such as me. So now, of course, there is an industry that believes in creativity, but it doesn't go much further than that. It's a long combat, and it's still a daily struggle.
(Music)

Question for Dries Van Noten, in the vocabulary of fashion, what is your favourite word?

Tradition. It's know-how, it's something that you can't forget.
(Music)

For me, fashion has become quite international, so, in our country for example, we have a showroom where we present the Anvers, Milan, Paris and Tokyo collections. So it's truly something that has become international for me.
(Music)

Unfortunately, most of the time when I come to Paris, it's to work, so either it's for a first view or it's to do the fashion show, the showroom then. I always tell myself that I will come back to Paris once again, but not for work, for a real vacation instead.