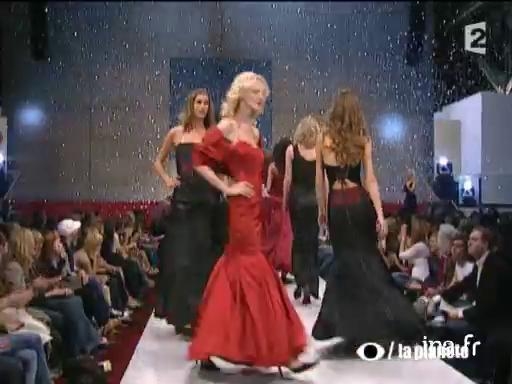 Report on the new fashion country, Germany: fashion shows in Essen, fashion in the street in Berlin, large chains (Puma, Birkenstock, Adidas, Hugo Boss), and interview with the designer of the Wunderkind brand, Wofgang Joop.

If German names have reigned over the universe of fashion, from Karl Lagerfeld to Claudia Schiffer and even Hugo Boss, the country itself has conserved an image that wasn't so glamorous. Doubtlessly held back by communism in the East and hardly encouraged by Protestant pragmatism in the West, re-unified Germany took some time to emerge on the scene of deluxe prêt-à-porter. Catwalks there are quite confidential and fashion weeks aiming to reunite the international high fashion crowd struggle to start. The first one only took place in July 2007 in Berlin and the big names were rare on the podiums, with the exception of Vivienne Westwood.

Creation is nevertheless everywhere in Berlin, the new capital of European avant-garde, very on point in design and electronic arts. The abandoned industrial land of East Berlin are meeting points for the young creators, reunited in collectives that makes music, plastic arts and design. Prenzlauerberg has the left-leaning yuppie feel of Greenwich Village, and the German brands Puma or Adidas have played on this "east-nostalgia" vogue by proposing vintage ranges valued the world over by the younger generations.

Paris, Milan, London, wrong again, we're still in Germany, in Essen to be exact, in the northwest.
(Music)

A city of 900,000 inhabitants, which has become the capital of fashion, during this fashion show at least. At first sight, the Ruhr region is more famous for its dirty faces and its coal mines than for its creatures with suggestive undies. They took out their big guns to present this ready-to-wear collection, they gathered today's big models, we ran into our national Noémie Lenoir...

And German top models, such as the ravishing Franziska Knuppe, 24 years old, 1.90 metres tall, she's the new Claudia Schiffer, the clothing designers are all after her.
(Music)

Despite many preconceived notions, Germany is very popular, it's even Europe's number one exporter of fashion. Who would have believed it?

(English) We have tons of well known designers, but also up and coming young designers, they're bringing a new spirit, a new touch to Germany, I hope that people buy and wear their clothing.
(noise)

We are far, very far from the image of the poorly dressed German. Besides, this consultant isn't mistaken, this is where he comes to sniff out the new trends.

Here it changes, here it's growing, the German woman is becoming a bit more sexy, a bit more sure of herself. They have less complexes, maybe they're a bit more sure about their seductive power. Maybe Angela Merkel has something to do with this, I don't know.

We went to Berlin to verify if the streets are following the trends. On first sight, it's not easy to explain, yet this Germanic fashion is all the rage.
(Music)

Are you a fashion victim?

But yes madam, the Birkenstock shoe company turned something old into something new. Its shoes sold without socks are flying off the shelves in all of the world's trendy stores, ever since top model Heidi Klum updated their look.
(Music)

Puma and Adidas, other German success stories, are brands that are so famous that we sometimes forget that they're German. Like Hugo Boss, who is now the world's number one ready-to-wear creator.
(Music)

The image of Germany is changing, Potsdam, the German Versailles, destroyed during the war but restored to its exact shape, Potsdam has become stylish and trendy. Wolfgang Jopp, 63 years old, is a child of the country, his house bears the name of Wunderkind, the child prodigy, you can't just make that up. Wolfgang Jopp lived in New York, Monaco, Hamburg, but since the reunification, he finally settled in his native city, east of Berlin.

(English) In order to not forget our historical situation here in Berlin and in Potsdam, I hung pictures of the border guards of the 4 allied forces, the French, the British, the Russians and the Americans. It's my own memorial.
(Music)

Mr. Jopp, who doesn't leave anything to random chance, is especially known for being the most famous German designer, he is the example of this Germanic renaissance. We're preparing the models of his new 2007 collection in his studio, they're inspired by the country's history.

(English) Over here, this is a typical Wunderkind dress, it represents everything, it reflects the glamour of the 20s and 30s, the chaos and destruction of our time period. (English) Fashion needs an underground, fashion needs poison, and that, I get the impression that we finally have it in Berlin. Our capital is back, a capital that is bubbling just like the big cities, like New York. Now, we can finally compare our city to Paris or New York or London.