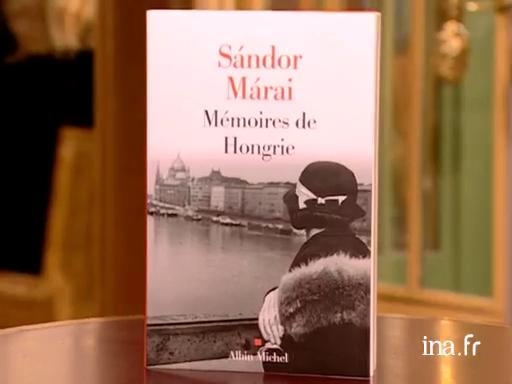 Presentation of Sandor Marai's book Memoir of Hungary. A prestigious writer in all of pre-war central Europe, Marai fell into obscurity after his voluntary exile to the United States. His work was rediscovered by Europe in the 1990s.

Sandor Marai was born in 1900 in Kassa, Hungary (today's Slovakia), and died in 1989. A journalist at the prestigious "Frankfurter Zeitung", he travelled through Weimar, Frankfurt, Munich, Berlin and Paris before staying in Budapest in 1928. A literary critic, it was he who first wrote the articles about Franz Kafka. At the same time, he was an author. His novels had an immediate success (The Rebels, 1930, Casanova in Bolzano, 1940, Embers, 1942).

In 1948 Hungary was put under the communist yoke: Sandor Marai was condemned by the new powers as a " bourgeois author" and forced to exile himself, first to Italy, and then the United States to San Diego. In 1956 following the invasion of Hungary by the Soviets, Sandor Marai showed his opposition to communism by refusing to let the works be published in the "occupied" countries. In California, he continued to write novels, poetry collections, theatre pieces, memoirs, always in Hungarian. But outside his birth country, his work struggled to find an audience.

Becoming a widower, living in an ever worsening isolation, Sandor Marai killed himself at the age of 89. His work, that remained largely unknown outside Hungary during his lifetime, was rediscovered in the 90s by the instigation of the editor Albin Michel and the director of the Hungarian collection Ibolya Virag. Today Sandor Marai's works are translated in several countries and he is considered as a major figure of European literature in the twentieth century.

Rediscovered nearly ten years ago, Sándor Márai has returned to the spotlight when Claude Rich adapted and staged his novel "Embers". Yet, this Hungarian writer, born in 1900 to a wealthy family, experienced glory. Throughout the Old World, everyone read the marvellous novels of this accomplished, well-read writer from Central Europe that was dazzled by the spells of Vienna, Berlin and Budapest. Then, with the arrival of Nazism and then communism, Sándor Márai chose exile. His "Memoir of Hungary" was just translated into French for Albin Michel, but Márai could have easily written it in our language, which he mastered perfectly. On the road, he stopped in Paris in 1948, but he hardly found the literary fervour that he caught a glimpse of before the war. So, he pursued his journey towards the west, and left for the United States. That's where he killed himself, fifteen years ago, nearly a nonagenarian. What a magnificent stylist, who totally knew how to confront his personal story with the one of the Hungarian people. He lived through the invasion of his country by Germany, and through its quote unquote liberation by the Russians, between the 2 wars, 2 differences, that the Soviets worshiped writers, which allowed Márai to pursue his work and to recall his country's glorious past, during the time when Austria and Hungary were taken down by the Treaty of Trianon. As for us, the French, we were familiar with the Treaty of Versailles, which cut Austria up. Trianon did the same to Hungary. "The poets, these rich Hungarians, have continued to write, you do need to start over." concluded Márai, now devoid of any illusion.
(Music)