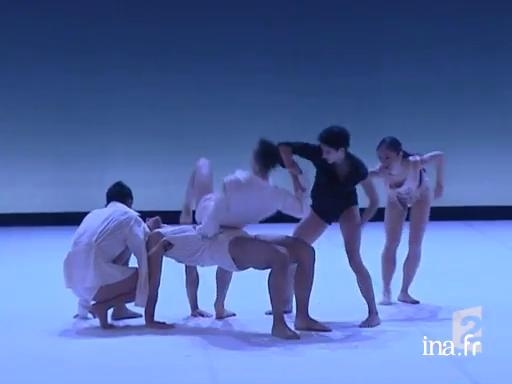 On the occasion of the performance of Near Life Experience at the Théâtre de la Ville, Angelin Preljocaj describes her way of working. The band Air explains in which spirit they put Prejlocaj's choreography to music.

Angelin Preljocaj, French dancer and choreographer of Albanian origin, born in 1957, is the artistic director of the Preljocaj Ballet - National Choreographic Centre in the Provence-Alpes-Côte-d'Azur region and has been living in Aix-en-Provence since 1996. First trained in classic dance, he followed a contemporary education at the Schola Cantorum in Paris, then in New York with Merce Cunningham. Back in France he became an performer, notably with Dominique Bagouet.

In 1984, he performed his first choreography in collaboration with Michel Kelemenis,Aventures coloniales, and created his own company the same year. The following year he received a prize at the Bagnolet competition withMarché noir. His brilliant career had begun. From 1986 his company set up in Campigny-sur-Marne and received a National Choreographic Centre status in 1989. A nos héros(1986) andLiqueurs de chairs(1988) confirmed his reputation. He was solicited for choreographies at the Ballet of the Lyon Opera, at the Palais Granier and the National Paris Opera Ballet. He received a Bessie Award in New York in 1997.

His dancing, expressed over the music of Stravinsky, Vivaldi, or even John Cage and Stockausen (who offered him a part in the brand newEldoradoin 2007), intelligently allying contemporary creation with classic revivalism. Preljocaj's pieces are shown all over the world.

Things weren't going to badly for the Preljocaj ballet dancers, a few hours away from the dress rehearsal. Last rehearsal to take possession of the city theatre's stage. 12 dancers, six women, six men, a mix of nationalities.

With Prejlocaj, a Frenchman originally from Albania, you can speak Japanese, Chinese, English, Swedish and even Italian. Twelve dancers and one choreographer whose workaholic reputation is unquestionable.

The fall is for the rehearsal. For the show, the bodies regain their fluidity. And putting it together between everyone works out great.

In fact, at first, I work a lot with improvisations that inspire me greatly, and it's really a ping-pong game with the dancers who provide me with a great deal of their personality, their creativity.

Angelin Preljocaj build his ballet with original music originally written by the band Air. Air is this: two young Frenchmen who conquered England and the United States with their electronic music, and who discovered, here, a new world.

For us, in the end, it was a real job of forgetting how to make music, to get back to the source of sound and to be able to be at one with the bodies' movement and not so much for people to listen to music, but rather to feel a pulse.

A pulse felt with enthusiasm by one of the great contemporary dancers, a spectator of this dress rehearsal.

We are in the water, we are in the elements since there is also fire for parts that are a bit more hysterical, so, after all, it has contact with all of these senses throughout the body. He lets that which is invisible appear.

Prejlocaj especially shows his talent and that of his dancers, in a ballet where physical performance and music try to define a new space.